Rakesh Sharma, Executive Director, Bajaj Auto Ltd talks about his outlook for the company in 2021, expectations from the union budget. 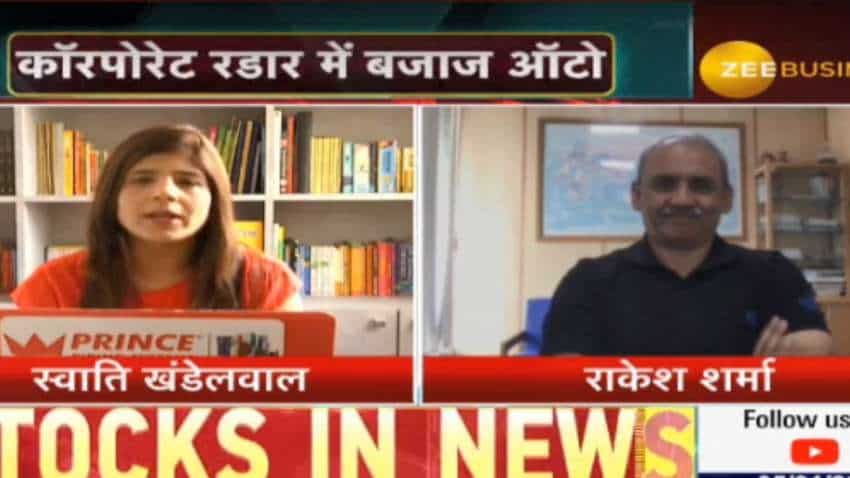 Rakesh Sharma, Executive Director, Bajaj Auto Ltd talks about his outlook for the company in 2021, expectations from the union budget, and expansion in Chakan, Maharashtra among others during an interview with Swati Khandelwal, Zee business. Excerpts:

Congratulations on being the world's first two-wheeler company who has reached a market cap of Rs 1 lakh crore. So, when are you going to double this market cap and how promising is 2021 for you?
The year 2021 is about to end as just 3 months are left in it. The retail figures that are coming after the festival - I trust retail statistics more because billing is different for every company as per their strategy - it seems, the market is at the last year's December to March levels or the motorcycle industry is progressing in a plus-minus 2-3% range in the domestic market. If seen in a way, then it is okay as, after the pandemic, we have reached to the last year's levels but if seems from a second perspective then the last year was 15-20% down from its previous year. So by the time, the year will end, we will be able to reach to FY2014-15 level. So, it can be said that that it is a reversal of last two-three years in the industry in the last two years. But it has bottomed out and if the economy grows gradually then I think that in the next one-two years, we will be able to reach the previous benchmarks that were established by the auto sector. This will be very good for the industry.

Budget is round the corner, so, do you have any specific recommendations or expectations from the government, which can boost your sector, especially the two-wheeler and three-wheeler space?
There have been a lot of representations from the auto sector and there have been specific discussions with relevant government departments. We expect, the discussion which turned quite mature will be transferred into some schemes in the budget or before it - as it is not necessary to do it along with the budget - like scrappage policy, Remission of Duties and Taxes on Exported Products (RoDTEP) and PLI scheme, which is a good though. It is a result of good industry-government dialogue. Now, an action should be taken on them, so that the participants of the auto industry, the auto manufacturers and component manufacturers, are encouraged and act aggressively in the markets, India and overseas market, in terms of these schemes. Secondly, an important aspect for our industry, particularly the motorcycle and three-wheeler industry, is consumer confidence and if a consumer gets some money and feels stability then his orientation turns positive towards spending and purchase of consumer durable. Thus, positive sentiment is an invaluable thing. So, the schemes, which are under discussion, are brought on the ground and the common consumer, including you and me, turn bit positive on the output will definitely make a big difference. Things have bottomed out and such kind of support will also bring growth.

You have plans related to expansion and recently you announced plans related to setting up a production facility in Maharashtra. How are you increasing total capacity and what kind of investments will be made for the purpose? What is your outlook for CapEx, expansion and focus on premium bikes in 2021?
We have announced that we will establish a new plant with one million (10 lakh) vehicles capacity some four kilometers away from the existing plant in Chakan in the almost same area of around 190 acres. It will result in the direct employment of around 2,000-2,5000 people and will increase our capacity by around 1 million units. Currently, Bajaj Auto has a capacity of 6.50 million units, which will increase to 7.50 million units. I think that one million capacity will be required for our premium motorcycles because of their performance in India and overseas in Bajaj Brand and other brands who are our partners like KTM and new partners with whom the partnership has been announced and we will be offering their products in the future in the market, namely Triumph and electric vehicle business which we have entered through Chetak has improved. So seeing, Bajaj premium Pulsar, Dominar, Avenger, the KTM range, the Husqvarna range and the upcoming range of Triumph and growing electric business, we thought that this existing capacity for premium products at Chakan would be filled, hence Chakan 2 was announced. We are quite optimistic that the business will go up at a faster pace.