Revolt Intellicorp has started the delivery of country's first ever electric bike from Monday. The company said that customers will start receiving first batch of RV400 in Pune. 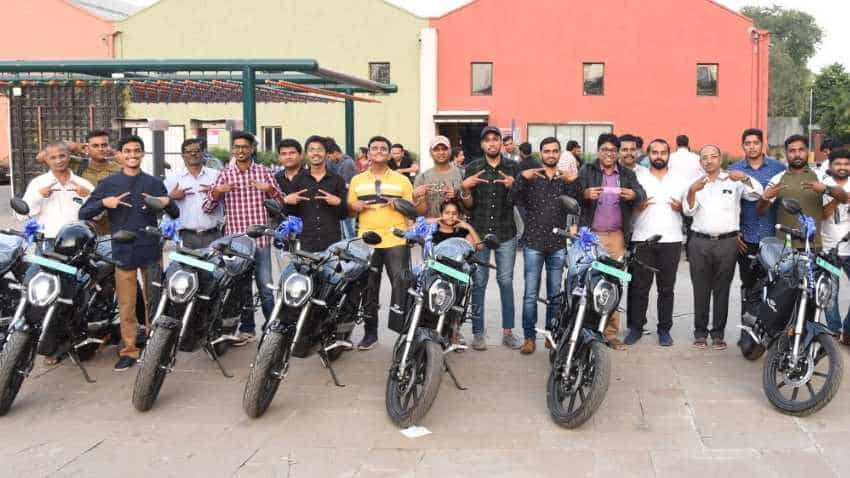 Revolt said that it has received tremendous response from the consumers largely because of its go-to-market pricing strategy. Source - Revolt.
Written By: ZeeBiz WebTeam
Edited By: Harish Dugh
RELATED NEWS

Revolt Intellicorp has started the delivery of country's first ever electric bike from Monday. The company said that customers will start receiving first batch of RV400 in Pune. It said that bikes will be handed over to customers as per the booking sequence from the two Revolt Hubs in Kalyani Nagar, and ICC Tech Park, SBRoad. Revolt said that it has received tremendous response from the consumers largely because of its go-to-market pricing strategy. Commencing deliveries in the city, bikes are already rolling out of the production line and the company aims to close all deliveries at the earliest.

"Electric Vehicles are becoming increasingly popular in Pune and we could see the trend in the pre-booking orders we have received from the centre. The RV400 is an important step in catering to emerging customer needs and we are confident that the new RV400 owners are going to enjoy their riding experience," Rahul Sharma, Founder, Revolt Intellicorp Pvt. Ltd, said.

He also thanked the customers for their response and having the trust and patience in an emerging brand. "Given the continued demand for booking, we will soon be closing the bookings for January-February 2020," he added.

Launched earlier this year, the Revolt RV400 is country's first electric motorcycle that costs Rs 3,499 per month. The company additionally introduced a second Model the Revolt RV300 at Rs 2,999. The RV400 is powered by a 3.24 KWh Lithium Ion battery that generates 72V of power and comes with a maximum range of 150 kms on a single charge giving it a top speed of 85 km/hr. It comes with a CBS braking system (Front Disc – 240 mm/ Rear Disc – 240mm) and an adjustable monoshock.

The Revolt RV400 has a ground clearance of 215 mm and will be fully charged (0-100%) in 4.5 hours. As part of the accessories package, Revolt will offer a connected helmet in partnership with Google, that allows you start the bike using a voice command- “Revolt Start.”

For test rides, customers can visit any of the 4 Revolt Hubs in Delhi located at Preet Vihar, Safdarjung Enclave, Dwarka and Gujranwala Town.