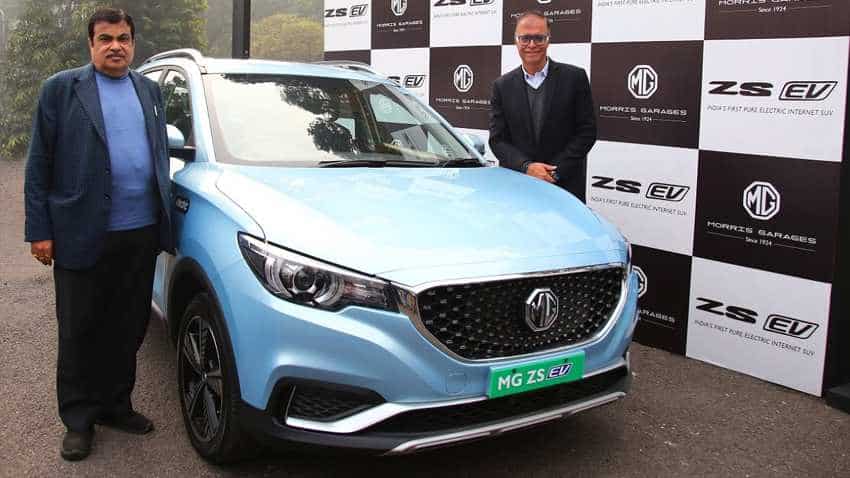 "The start of production of the MG ZS EV is part of the carmaker’s commitment to a clean and green future and aligns with the government’s vision to put more electric vehicles on the Indian roads," MG Motor India said in a statement.

Speaking on the future of mobility in the country and the role of automotive players such as MG Motor India in it, Nitin Gadkari said, “India stands at the cusp of a new era that will be driven by sustainability. EV adoption is the future of mobility and will play a huge role in curbing the growing pollution crisis, as well as reduce the country's dependence on fossil fuels. I am delighted to see that private players such as MG Motor India are taking measures to complement the government's steps to promote electric mobility in the country.”

- MG Motor India is setting up a 5-step charging ecosystem that is aimed at fulfilling the needs of EV customer.

- Each ZS EV comes with an on-board cable to charge at any 15amp socket.

- The car maker will also install an AC fast charger at home/office of the customers.

- The carmaker is also setting up a DC Super-Fast charging network at select MG showrooms that can be availed 24x7 and plans to create an extended charging network across MG dealerships in select satellite cities along key routes and provide charge-on-the-go with RSA (road side assistance).

- Through Super-Fast DC chargers (50 kW), the ZS EV will reach 80% battery capacity within 50 minutes while AC fast chargers installed at homes will take around 6 - 8 hours for a full charge.

Commenting on the showcase of the MG ZS EV, Rajeev Chaba, President & Managing Director, MG Motor India, said, “We are thankful for the government’s continued support in the development of the end-to-end ecosystem that we are putting in place through our associations with market-leading charging infrastructure companies.”

According to the carmaker, "Not only charging infrastructure, MG Motor India is also working responsibly towards ensuring that the MG ZS EV’s battery is re-used and disposed responsibly. The company has tied up with two different companies - Exicom Tele-Systems for second-life use of the batteries in a wide range of non-automotive applications; and Umicore, global materials technology and recycling group headquartered in Belgium for battery handling, recycling and end-of-lifecycle battery disposal."