Mercedes-Benz S-Class S 450 facelift: Here is what you get now

Mercedes-Benz calls this the ‘triple torch’ and it’s now a sign of hierarchy at the company  the  s get three strips, the  e-class  gets two and the C-class gets one. Unlike the?diesel S Class which gets a new- generation, in-line six-cylinder engine, the petrol car continues with the 3.0-litre V6 from the S 400, which has been tuned to produce more power 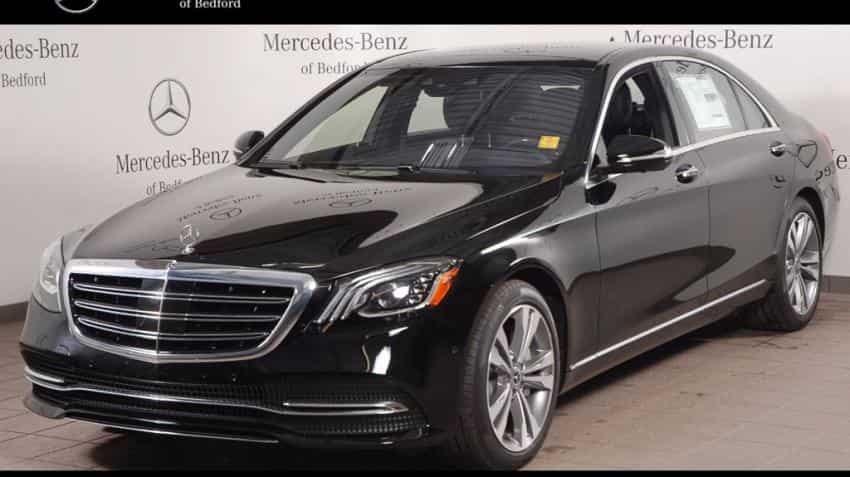 Dynamically similar to the S 350d, the S-Class S 450 ride is super supple and only large potholes and bumps manage to upset the s 450. Image source: Company website

Mercedes has just updated its mighty luxo-barge the S-Class S 450. Understandably, it hasn’t tried to fiddle too much with what is an extremely successful car. But what it has done is tweak it just enough to stay contemporary and ahead of the competition. So, you get the new headlights, tail-lamps, grille, bumpers, and wheels. most of the changes are very subtle, and, to the casual eye, it would seem no different from the previous car. However, there is one quick tell  the three LED strips in the headlights. Mercedes-Benz calls this the ‘triple torch’ and it’s now a sign of hierarchy at the company the s get three strips, the e-class gets two and the C-class gets one. Unlike the?diesel S Class which gets a new- generation, in-line six-cylinder engine, the petrol car continues with the 3.0-litre V6 from the S 400, which has been tuned to produce more power.

Figures now stand at 367hp and 500nm of torque, which is 34hp and 20nm more than the s 400. It’s also mated to a newer nine-speed auto gearbox while the older car has a seven-speed unit. another difference between these cars is that while the diesel is BS-VI-compliant with BS-IV fuel, the petrol isn’t. Being a petrol engine, you do expect better performance and refinement than the diesel, and the car does deliver on these fronts. Mercedes claims a 0-100kph time of 5.1sec for the petrol and 5.6sec for the diesel. It is quick right off the bat, and after about 3,000rpm, there is a nice surge of power, accompanied by a slight sporty growl from the engine. however, in all other instances, it’s super- refined and quiet of course the diesel car is, too, but this one feels even better, still. 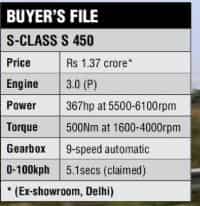 A major highlight of the new S-class is the new driver assistance system that Mercedes calls aDas (advanced Driver assistance systems). on the brilliant outer Ring Road in Hyderabad, with lane markings neatly laid out, the s 450 performed really well. with aDas, the car can drive in autonomous mode, accelerating, braking and even steering to keep its lane. You can even take your hands off the wheel, but do that for too long and the system will remind you to get them back. It isn’t technically a ‘hands- off’ system, but more of an assistance system meant to help you keep your lane, thus you are required to have your hands on the wheel, ready to take charge, should the system require it. we tried it for a couple of kilometres and the s-class drove well, managing to keep pace with the car ahead while keeping its lane on sections where lane markings weren’t done yet, we had to take over manually. For such cases, the s 450 has what is called ‘swarm behaviour’, where it will follow the car ahead, but only for mild changes in direction; anything dramatic and you are required to take the helm.

Dynamically similar to the S 350d, the ride is super supple and only large potholes and bumps manage to upset the s 450; it has all-round air suspension to thank for that as well as taller sidewall (50 profile) tyres, that extra bit of rubber does help. at high speeds and undulating roads, however, the ride feels floaty and you have to put it into sport mode to lessen this. Don’t be misled by the name, though; ‘sport’ doesn’t mean you can drive this like a sportscar, but only with a bit more verve thanks to a more responsive powertrain, firmer steering, and a slightly?tighter ride. this is, after all, a limo for the boss to lounge in the back seat and not a race car to enthusiastically hurl around corners. the cabin is simply heavenly. the reclining rear seats are very comfortable and offer a massage function. the seat behind the front passenger can also transform into a lounge chair with an ‘ottoman’ and a footrest that can be pulled out from the front seat. It’s easily the best seat in the car. seating at the front is also opulent and the facelift does bring with it a few more goodies, like a fully modernised infotainment system that has apple CarPlay and android auto (a first for the s-class). the screen, however, still isn’t a touchscreen. So, while the facelifted s-class may be just that from the outside, the super-refined and more powerful engine, the aDas system and other goodies do move this car a clear step ahead of the old car  and with its traditional strengths of the best rear seat around and pillow-soft ride intact, the s-class is still the car to beat in its segment.