Overall gains in Maruti Suzuki share price today was by little over Rs 81 - it touched an intraday high of Rs 6494 per piece. 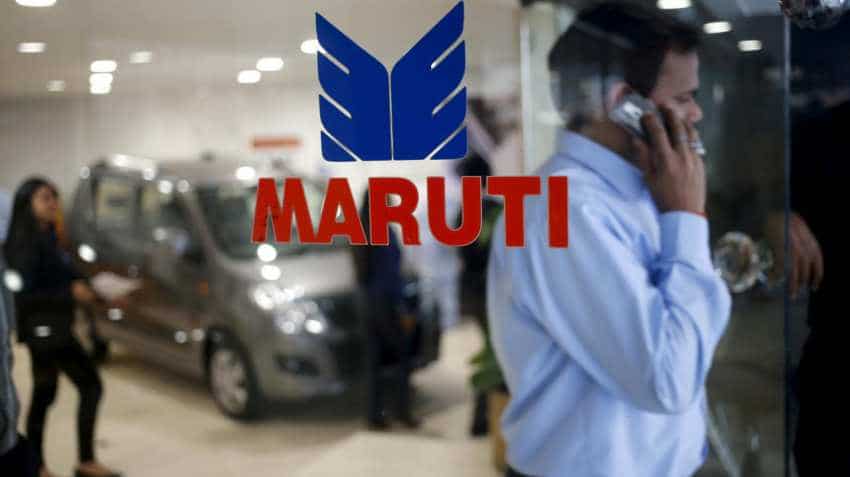 Maruti is seen as well placed compared to its peers as the shift towards BS-VI norms continues at full speed. Photo: Reuters
Written By: ZeeBiz WebTeam
RELATED NEWS

Maruti Suzuki share price is reflecting the fact that investors have retained faith in the counter even though it has been volatile since mid-2018 on the back subdued sales and various other factors. However, looks like a turnaround is just around the corner for Maruti, with sales seen to improve. Also, Maruti is  seen as well placed compared to its peers as the shift towards BS-VI norms continues at full speed. On Monday, Maruti shares ended on a positive note at Rs 6,462.95 per piece up by Rs 50.50 or 0.79% on Sensex. Overall gains in Maruti Suzuki share price today was by little over Rs 81 - it touched an intraday high of Rs 6494 per piece.

Where are Maruti Suzuki shares headed?

On interaction with Maruti’s Bihar dealers, Raghunandhan N L and Mumuksh Mandlesha analysts at Emkay said, “MSIL’s Bihar dealer experienced double-digit volume declines in Apr-May’19 due to purchase deferrals in the election period, mainly by the business community. After the completion of the general elections, there are early signs of revival in Jun’19, with ~12% yoy increase in showroom walk-ins and ~10% yoy growth in volumes. Similar trends are being witnessed in states such as West Bengal and Uttar Pradesh. Volumes are expected to improve gradually, driven by pent-up demand, pre-buying of diesel vehicles before the BS6 transition and product launches such as a new hatchback and gasoline versions of Brezza and S-Cross.”

The duo also highlighted that, competitive intensity should increase in the near term due to the launch of products from OEMs such as Tata Motors (Altroz hatchback) and Hyundai (Venue compact UV).

On stock price, the duo said, “The stock is currently trading at a P/E of 23x/19x on FY20E/21E EPS. MSIL is relatively better positioned than its peers to address the upcoming BS6 transition as a result of its significant exposure to petrol vehicles. Maintain Hold with a revised TP of Rs6,700 compared with Rs6,800 earlier. Our new TP is based on 20x FY21E EPS. We have an OW stance on MSIL in sector EAP. Key downside risks we see are an appreciation of the JPY, rising competitive intensity, and adverse movements in commodity prices.”

Recently, the Supreme Court has made matters critical for automakers who are selling vehicles having Bharat Stage IV.  The apex court has ruled that from April 01, 2020,   no Bharat Stage IV vehicle will be sold across India. Instead of Bharat Stage IV, automakers from April next year must follow the Bharat Stage VI (or BS-VI) emission norm. Many auto industries have already shown concern over the transaction from BS-IV to BS-VI, but looks like Maruti can surpass this situation.