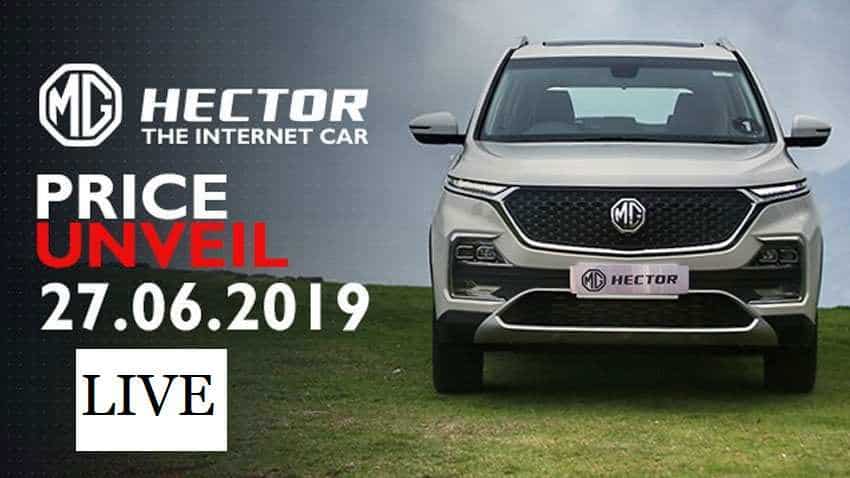 The 1.5-litre turbocharged petrol engine delivers 143 PS power at a peak torque of 250 Nm and will be available in both manual and automatic transmissions.

MG Hector Launch, Price Announcement LIVE: Finally, after a long wait, the day has arrived when Morris Garages' first car in India, an SUV, MG Hector's price will be revealed and the machine will be officially launched in India. The official launch and price unveiling ceremony of the much-awaited SUV MG Hector is taking place today  i.e 27th June. According to official confirmation by MG (Morris Garages) Motor India, the price announcement and launch of SUV MG Hector is taking place in Gurgram at MG Flagship Showroom. The bookings for MG Hector are already underway.

Here is how you can WATCH price announcement and launch of SUV MG HECTOR LIVE:-

The bookings for the MG Motor, India's first vehicle in India began on June 4. MG began online bookings at 12 noon on June 4 on its website, mgmotor.co.in. The bookings will be initially supported across 120 centers in India. The carmaker aims to expand this reach to a total of 250 centers by September this year. In a statement, MG Motor had said that it will soon begin dispatches of the Hector from its Halol plant to its network across 50 cities in India.

MG Hector: All you need to know about features and other key details

Hector is the first car with a sophisticated 48-volt mild-hybrid architecture in its segment, making MG Motor the first mainstream carmaker in India to bring 48V technology to the mass market segment.

MG Hector comes with internet inside, next-gen iSMART technology. At 10.4 inches, it has the biggest HD touchscreen in its segment. Moreover, Hector features MG’s signature design cues, including the famous star-rider grille.

"The latest environmentally-friendly engine technology uses a 48-volt lithium-ion battery to store energy and provide extra torque assistance of up to 20 Nm when required. The combination of three key functions – Engine Auto Start Stop, Regenerative Braking and E-Boost – ensures a great driving experience while reducing emissions by up to 12%," MG Motor India said in a statement.

MG says that Hector has been tested for over one million kilometers in India before entering production and will be available in both petrol and diesel variants.