Electric Chetak will be exclusively through the digital channel for a certain period after which it will be placed at KTM dealerships across the country, says Rakesh Sharma, Executive Director, Bajaj Auto Ltd. 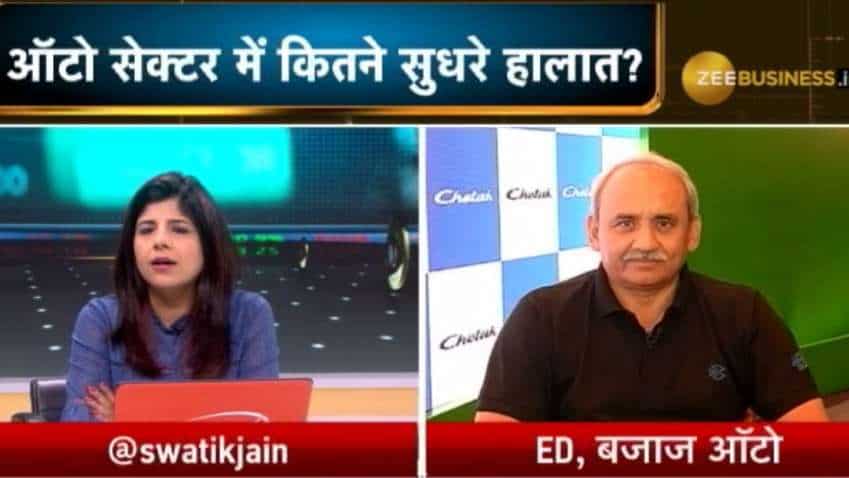 The government should mitigate the increased prices of the vehicles, particularly, the two-wheelers by reducing the GST rate.
Written By: Jitesh Kumar Jha
Edited By: Asit Manohar
RELATED NEWS

Bajaj Chetak Launch: All you need to know about this new electric scooter

Electric Chetak will be exclusively through the digital channel for a certain period after which it will be placed at KTM dealerships across the country, says Rakesh Sharma, Executive Director, Bajaj Auto Ltd. During an interview with Swati Khandelwal, Sharma said, " The government should mitigate the increased prices of the vehicles, particularly, the two-wheelers by reducing the GST rate". Edited Excerpts:

What is your sector expectation from the budget this year?
The entire auto industry is going through a decline phase particularly the two-wheeler industry. Additional costs, in the form of insurance, ABS and BSVI, has been added to the two-wheeler segment in the last one and a half year. This together has increased the cost of these vehicles almost 25%. We work across the year to reduce our cost by 1-2% in a year, which is a big achievement for us, but such an instant increase of 25% in cost is a big thing. So, the government should mitigate it by reducing the GST - particularly for the motorcycle industry - which will be a welcome step. Apart from this, other expectations with the budget remain the same one and that is that the government puts some money in the hands of the general public, build their confidence in the economy so that they can increase their expenditure. Thus, this is one thing that will benefit OEMs like us.

Let us know about the kind of response that you are getting on the electric variant of Chetak and what are your expectations related to booking in the next few months?
The response has been overwhelming and ever since we unveiled Chetak in Delhi in October after which 'Chetak Yatra', was conducted, which was a journey of 20 Chetaks over 3,500 kilometre and all this was digitally being put-out. And, because of that, we were receiving a lot of enquiries and interest from all over the country, partly because people are very nostalgic about the Chetak brand and part of being electric. Having said that it is very difficult to put the number as to how much interest is going to translate into particular enquiry. We will see how it unfolds.

How different is your product in terms of features and pricing against your competitors in the market?
With Chetak, we just don't want to provide an electric vehicle but pride of ownership to the buyers. This is a reason that we have a special focus on styling and simplicity, with an aim to provide a friction-free experience in terms of buying, ownership, driving and service to the customer. Putting all these together I feel that our style is a standout style with a dignified presence, which should turn the heads. Apart from this, it comes with several features like it is the only scooter with an all-metal body and it has been done to add strength to the vehicle, which is the sought by the Indian customers; lighting is LED and DRL; the range is 95-100km/hour. These are the things that make it better than the competitors.

Chetak will be sold exclusively through the digital channel only. Does it mean that this scooter will not be available even for display purposes at the existing Bajaj dealership? Tell us about the strategy in terms of the distributor?
Bajaj also has KTM business and have around 450 KTM stores across India. So, in the first phase, electric Chetak is placed at select KTM dealership in Pune and Bangalore. At first, we want to study the way customers are receiving it, Chetak, the difficulties they will face in terms of the charging ecosystem and how he responds to it. The scooter will be rolled out after studying these factors. The distribution network is ready but we don't want to do anything prior to time as it may have a negative impact not only on Chetak but on the entire electric community. So, we will like to study the outcomes of Pune and Bangalore and then they will be rolled out across the KTM network across the country.

What are your expectations from Q3 and Q4 before BSVI comes into force? How you are prepared and also tell about the inventory level and market response in the products?
The industry is going through a decline phase but pre-buying is likely to happen in February-March after people will come to know that the prices of BSVI are being revealed. Possibly some customers can be seen after knowing about the cost increase. But such customers will do exist at the same time, who will think that why should they go for BSIV technology as they may face certain challenges in future. Guessing the kind of impact that it will have in February-March is a difficult task but the underline movement in the industry is in negative zone till date.

Do you think that the inventory levels at the dealership levels have reached an optimum level?
The industry reduction exercise was initiated in the month of March at our end and we have been matching our retail and billing for the past few months. In fact, there are places were stock out conditions have been created and we are engaged in fulfilling their demands. So, the lying BSIV stock with us is under control and we believe that the entire stock will be washed out by March 2020.

Being one of the largest two-wheeler exporters what is your outlook on export prospects in Q4 and had the global market uncertainties has had any impact on your business? Also, tell about the geographies where more opportunities are visible?
It is looking good. The performance of Q2 & Q3 doesn't give a sense that certain things different can happen in the Q4. Yes, some major geopolitical disturbances like war or something else will definitely have a big impact. But, the kind of stability that we saw in Q2 & Q3 is likely to continue in Q4. Thus, the ongoing double-digit growth that we had in the two-wheeler segment will continue to be the same, however, a minor decline can be seen the three-wheeler segment due to certain restrictions that have been enforced in Egypt, which was a big market for us. Overall, we will see a high-single-digit export growth in Q4.

Bajaj Chetak Launch: All you need to know about this new electric scooter