Hyundai Kona to be unveiled on June 13; here is what you need to know about the car

Hyundai Kona will be unveiled at the Frankfurt Motor Show 2017 on June 13. 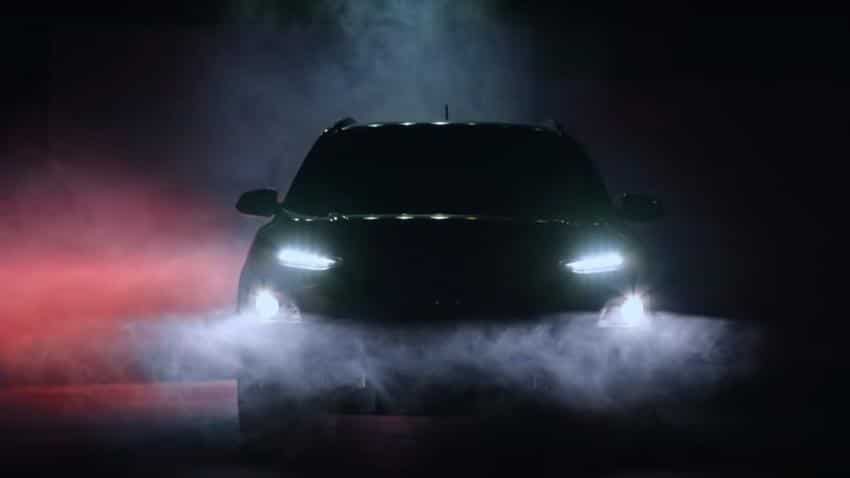 A still from the teaser video of the Hyundai Kona. Photo: YouTube Screengrab
Written By: ZeeBiz WebTeam
RELATED NEWS

Hyundai had first released teaser videos of its upcoming sub-compact SUV Kona on Monday. This new car from the Korean car manufacturer is expected to make its world premier by June 13. There were pictures of the Hyundai Kona which was spotted in Lisbon during a shoot of its TV commercial.

The Hyundai Kona is a i20-based SUV and is expected to be first in Europe before making its way to India and other markets around the world. This is as it will unveiled at the Frankfurt Motor Show 2017.

Hyundai Kona is expected to be a premium offering from the company as the video indicated words like high-end and B-SUV.

The compact SUV will be positioned below the Tucson, which was launched recently in India and is expected to compete with cars like the Honda HR-V, Toyota C-HR, Renault Captur and Nissan Juke. All of these cars have yet to make it into the Indian market.

The Hyundai Kona is expected to be powered by options such as 1-litre and 1.4-litre turbocharged petrol and a 1.6 litre diesel engine. This same engine options are also seen on the recently unveiled Hyundai i30 hatchback which is sold in Europe.

In terms of the exteriors you will find similarities to the Hyundai i20 as it features the new signature Cascading grille and unique-looking foglamp clusters on either side. It has a plastic-cladded muscular bumper and a sculpted bonnet. It also has slim LED headlamp cluster that gives it a futuristic appearance.

Some of the other features of the Hyundai Kona include diamond cut alloy wheels, black ORVMs with integrated turn signal lights, black roof rails and dual-tone body colours.

With these features and the premium pricing of the car it is not yet known when the car would be launched in India. Hyundai India is also working on a sub-compact SUV for the Indian market to take on Honda BR-V, Maruti Suzuki Vitara Brezza, Ford EcoSport in that segment. This could be an option instead of the Hyundai Kona for the Indian market.