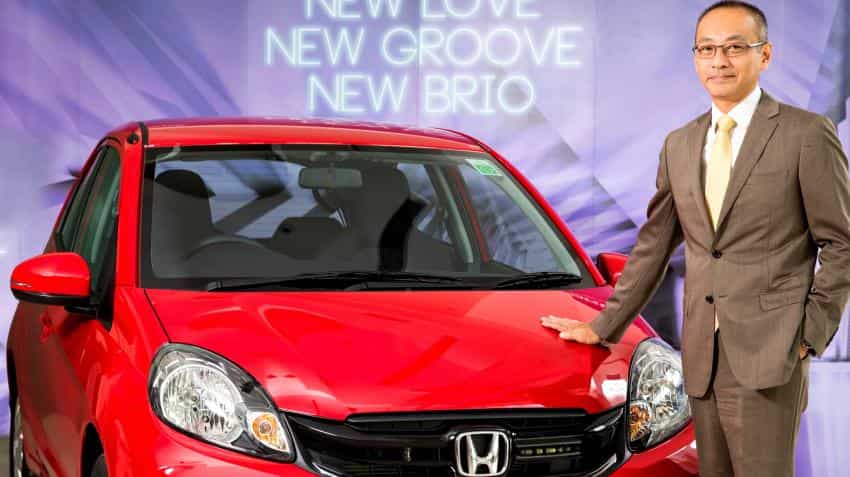 Honda Cars India has launched an all new petrol version of Honda Brio in New Delhi on Tuesday with starting price of Rs 4.69 lakh.

The face-lifted Brio comes with all new exteriors, interiors and advanced features.

Honda Cars has given Brio a bold new look with a high-gloss black and chrome finish with sporty front grille and a stylish front bumper, cited the company in a press release.

At the rear end, the Brio has got a new and elegant tail lamp and an all new tailgate spoiler with LED high mount stop-lamp that adds to its sporty image.

Brio is now available in premium and spacious beige interiors and new sporty black interiors for the top variant. Besides, the car interiors come with enriched seat fabric to add to its premium appeal.

On the advanced features, the face-lifted Brio comprises of Advanced 2 DIN Integrated Audio (USB and Aux-in) with Bluetooth connectivity and hands free telephony function. It has digital AC controls with Max Cool function in order to give a hassle free and comfortable drive for its occupants.

“The Brio remains an embodiment of Honda's engineering prowess and manufacturing excellence. Brio has the distinction of being the industry topper in quality scoring No 1 position in the J D Power IQS results year after year. The car is not just ‘made for the people’ but ‘made around the people’," said  Honda Cars India president and chief executive officer Yoichiro Ueno in a statement.

The company had launched the Honda Brio in 2011 in India.

The petrol version of Honda Brio comes at a starting price of Rs 4,69,000 (ex-showroom New Delhi) for the entry-level segment and it goes up to Rs 6,81,600 for the top-end variant.

It will come with the standard two-year per 40,000 kilometers warranty, the statement said. The car will come with four-cylinder 1.2-litre i-VTEC engine that delivers maximum output of 88 PS at 6000 rpm and Torque of 109 Nm at  4500 rpm, the company said in a release.