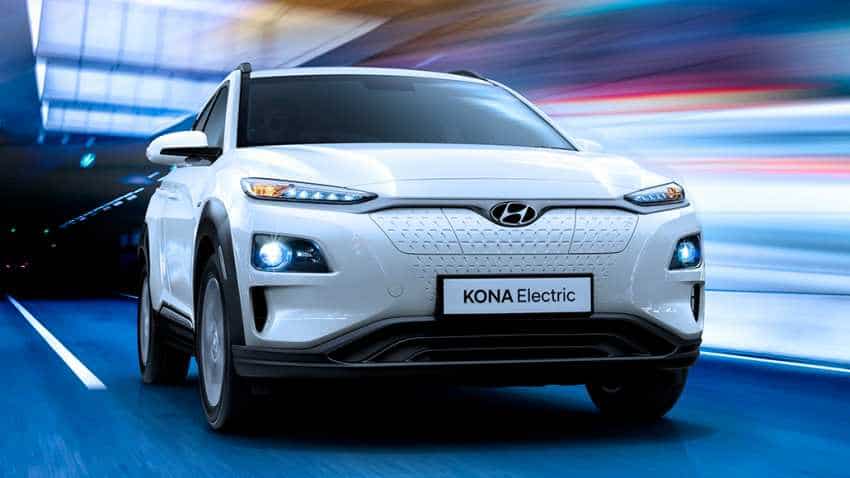 This all-new Kona Electric car was launched in India on July 09, 2019, and within 10 days of its entry the car already received some 120 confirmed bookings. Photo: Hyundai Official Website
Written By: ZeeBiz WebTeam
Edited By: Harish Dugh
RELATED NEWS

The largest lender State Bank of India (SBI) has been boosting its auto loan segment by introducing various offers on newly launched vehicles of many automakers. In latest news, SBI has allowed booking of new electric vehicle entrant in India namely, Hyundai KONA Electric via the SBI YONO app. One of the amazing benefits is that, if you cannot fund electric car, then SBI has also launched its Green Car loan with affordable EMIs as well. Hence, buying electric cars has become even easier!

SBI said via its Twitter account, “Drive into the Future with KONA Electric. Book the Hyundai KONA Electric on #YONOSBI and get priority delivery.”

This all-new Kona Electric car was launched in India on July 09, 2019, and within 10 days of its entry the car already received some 120 confirmed bookings. Also, some 10,000 test drive request have been submitted at the company. This shows that Indian citizens are getting the likes of Kona electric. The all-new Kona Electric is characterised by its distinctive high-contrast fender cladding and the muscular surfaces atop a stable, wide stance.

The key design elements at the front are the closed grille as well as the Composite Light. They create the car’s progressive appearance with LED daytime running lights positioned on top of the LED headlights.

Also, it is available with a two-tone roof, offering a wide variety of individual choices to match the customer’s style. Seven exterior colours in total can be combined with three roof colours for a total of 21 stylings. The roof and exterior mirrors can be chosen in Phantom Black, Dark Knight and Chalk White. The exterior colours are available in Chalk White, Dark Knight, Tangerine Comet, Ceramic Blue, Pulse Red, Acid Yellow and All-New Galactic Grey.

For the interior, customers can choose Black or the new three-tone Blue and Grey interior colour. The car combines all the buttons to facilitate operation of the car intuitively with the shift-by-wire module. Also, an extra storage space for personal items can be found underneath the centre console.

Further, the  new high-resolution 7-inch supervision cluster displays the different gauges, such as the speedometer, battery charge level, energy flow and driving mode to the driver.

In addition, the combiner head-up display (HUD) projects the relevant driving information directly to the driver’s line of sight. With a projected image size of eight inches at two metres distance and a luminance of more than 10,000 candela per square metre, the new head-up display guarantees optimal visibility in different light conditions.

SBI green car loan (electric vehicle) scheme comes with the longest repayment period of up to 8 years and is a strategic inclusion to the bank’s auto loan segment offered with zero processing fee for the first six months of the launch.

One of the key charms is that, the loan can be opted at maximum 8 years. This makes EMIs cheaper even for middle class families. For instance, SBI reveals that if you take electric vehicle loan for 8 years tenure, then your EMI is Rs 1,468 per month for 96 months. This is way lower compared to EMIs of Rs 1,622 for 84 months on existing scheme.

At first, SBI green car loan interest rate you will pay will be cheaper by 20 basis points. There is also a processing fee waiver in the first six months of the launch. That means, if you opt for electric vehicle loan at SBI within this 6 month period, your transaction value will not include processing fee, however, opted after this period there will be a little charge.

Hence, why not book and fund for your Hyundai KONA in simple steps. Notably, SBI Yono platform allows in-principle delivery if booked this car at their portal.

IPL 13-RCB vs CSK: Feels good to be winning the match for my side, says Ruturaj Gaikwad