Commercial Vehicle industry will grow by 15-20% in next fiscal: Nitin Seth, Ashok Leyland

Nitin Seth, President LCV Business, Ashok Leyland Limited, talks about the commercial vehicle industry and provided a business outlook of the segment during an interview with Zee Business. 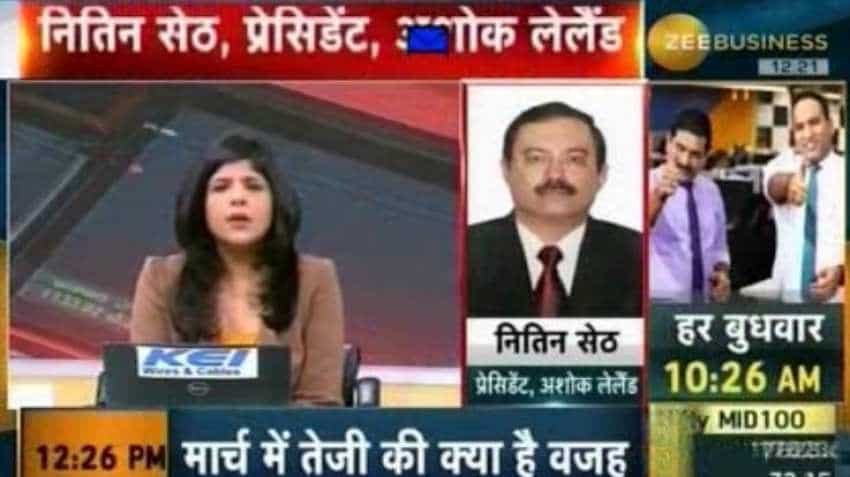 Nitin Seth said "technology is a bit expensive and it is in its early stage of a start but will try to win the new tenders that will prop up in future." Image source: Zee Business
Written By: Swati Khandelwal
RELATED NEWS

Q: Ashok Leyland is the largest commercial vehicle maker and its volumes have increased in recent past like in January. What is your outlook on the segment for the running quarter and financial year 2019-20?
A: I would like to talk about the industry that has faced issues related to funding from NBFCs, which caused a downtrend in the market. Unavailability of the funds was able to create a negative sentiment in the market. Going forward from here the industry can grow by 15-20 per cent in the next financial year. In addition, the financial situation will ease out, which was seen in NBFCs in the last six months.

Q: March is a strong quarter especially because companies execute their orders in the month. What is your expectation from the quarter?
A: I think that March will be better than January and February, but you must have a look at the base effect that existed between January-March last year, which was quite high. Thus, last year the base was too strong. It was a bumper quarter for all manufacturer. But, the volume, which will be high this year will not be able to pull growth as the base effect was not sound this year.

Q: What is your view on margins?
A: High-interest rates put pressure on the margins, but the company will try to restrict its impact as we did in the last quarter. Our EBITDA stood at 10.4 per cent in the December quarter and will try to maintain it at the same levels. Given that we don’t give a forecast for the forward-looking market, I will not be able to say anything more on the issue.

Q: Update us on your order book for the bus segment and kind of action on electric vehicle segment?
A: I don’t want to make any direct comment on it as I am not handling the segment but would like to say that Ashok Leyland has received an order from Institute of Road Transport (IRT) in Tamil Nadu and a new order from Gujarat. We will try to maintain the high market share, which is above 50 per cent, that we hold in the STO segment over our competitors.

When it comes to electric buses then we have started it in a limited manner and have started delivering them in Ahmedabad. The technology is a bit expensive and it is in its early stage of a start but will try to win the new tenders that will prop up in future.