"Prices across various range of vehicles will go up from January 2020 as increased input cost has adversely impacted the cost of the vehicles", says Shashank Srivastava, ED — marketing Sales at Maruti Suzuki. 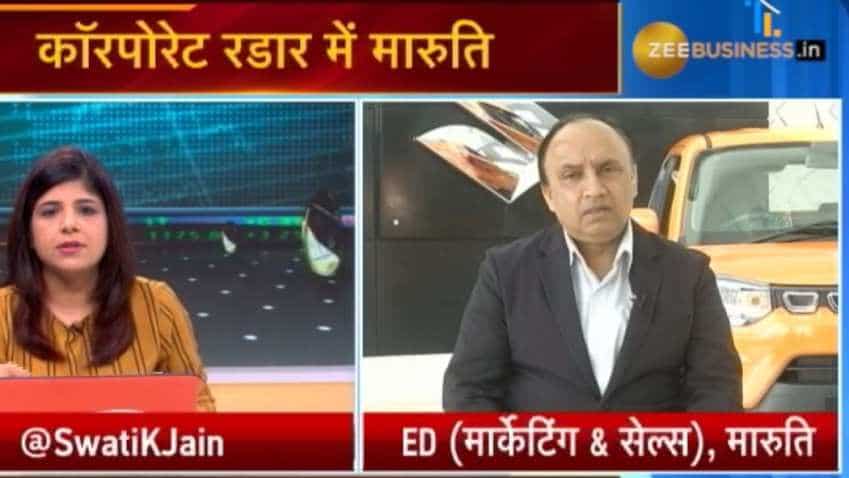 "Prices across various range of vehicles will go up from January 2020 as increased input cost has adversely impacted the cost of the vehicles", says Shashank Srivastava, Executive Director - Marketing and Sales, Maruti Suzuki. Srivastava during a candid chat with Swati Khandelwal, Zee Business, said, " October has been the best month for entire auto industry including Maruti Suzuki". Edited Excerpts:

Maruti Suzuki has announced that prices of all its models will increase from January 2020. What is the reason behind this price hike and what is its quantum?
Increase in input cost is the main reason for the price hike. Apart from this, the discount levels offered to customers in the last 12 months, when the auto industry was going through a slowdown, is very high, non-sustainable and hard to carry forward. Our input cost has increased because the latest norms of emission and safety prescribed by the government have been included/managed into every vehicle. I think December is the best time to buy the vehicles because prices are going up and promo levels in every model are at its highest at this moment.

This is the first time in 9 months when you were able to increase your production levels. So, what is your outlook for 2020 and do you feel that the worst period of the auto industry has bottomed down for the auto sector?
October has been the best month for the entire auto industry including Maruti Suzuki after seeing a continuous decline for many months. Till start of October, the stocks with the dealers were too high but it declined significantly by the end of October. If you have a collective look on October and November numbers there has been a small growth in the industry. Talking collectively about October and November as Dhanteras and Diwali, which is a season for more sales, fell in November last year. And a collective look at the figures of the two months suggests that it has remained positive for the industry. As far as the future is concerned, then we will have to observe the things before concluding that the industry is moving in a positive/growth direction. We are cautious because we will have to see how the industry will perform in the months when there will be a price hike and promo-level/discount-levels will decrease. The figures for these months will give a feeling that things have changed for the industry.

What is your take on rural demand as it has almost 40% contribution in your total volume?
There has been negative growth in both rural and urban demand in the first half of the year - April to September - because the cost of acquisition of vehicles has increased and tightening of finance especially in rural areas as last year some NBFCs had some issues in financing. But, monsoon has been a good one and rural sentiments have improved. This is why there is a positive change in October and November numbers when compared to last year. This is a positive sign. Besides, Maruti Suzuki's rural growth has been better than urban growth for the last five years and it has also been better in October and November as well. This is why our percentage share, which stood at 37-38% last year has bettered to 39% this year. I think Maruti's strong presence and wide network in this area will help us in future as well.

What is your inventory level currently and do you see pre-buying happening in Q4FY20 before BSVI is implemented?
BSIV and BSVI is the biggest matter of concern for the consumers and as far as inventory level is concerned then it decreased a lot at the end of October. Currently, we have an inventory level of around 25days. I believe that if December sales remain a good one then the inventory levels will come down further. Therefore, the beginning of the year should be a good one from an inventory point of view. As far as BSVI is concerned then it will be regulated from April 1, 2020, and Maruti Suzuki has planned well for it as its 8-petrol models have been turned into BSVI. Interestingly, petrol BSVI models of Baleno and Auto were launched in the market in April 2019 itself despite the government has mandated April 1, 2020, as a date to be on BSVI platform. The launch of these two vehicles was followed by launches of Dzire, Swift, XL6, S-Presso and Swift Dzire. So, eight models of our vehicles are available in BSVI format today and they have a good contribution in terms of volume to Maruti Suzuki and there BSVI petrol version has 70% contribution in it. Interestingly, BSIV cars stocks of these models are almost over at our end. Besides, we have already said that the BSVI diesel model of certain vehicles, like S-Cross and Brezza, will not be launched but their petrol versions will be launched soon. I expect that this transition from BSIV to BSVI will be a smooth one for us.

Diesel car constitutes about 23% of your total sales. Do you rule out any plan of launching any BSVI version of diesel cars even in big cars?
The share of small diesel vehicles is still very low and the 23% contribution said by you has gone below 20% in October and November. The cost of conversion from BSIV diesel to BSVI diesel will be very high. so, whether we do or our competitors, the cost of diesel will see tremendous growth and that's why the percentage of diesel should reduce further. This is why we have said that small diesel vehicles will not be launched. But, if we see high demand in big diesel vehicles despite the high price of BSVI diesel then we will think of coming out with big vehicles in BSVI diesel format as well.

To entice the customers, what is your pipeline of new product portfolio for FY21?
I can't say a lot about the new products but can inform that petrol model of S-Cross and Brezza, whose diesel model is only available at present, will be launched in next quarter. BSVI petrol models of the two vehicles will be launched with a hope that our share in the SUV segment, which is a growing segment, will increase further. Taking this opportunity, I would like to inform you that petrol vehicles had a large contribution in the SUV segment. The percentage of petrol vehicles has increased in both Kia Seltos as well as SUVs from MG Motors. Thus, I think that the BSVI petrol version of S-Cross and Brezza will help us in increasing our market share in the SUV segment.

Stocks in Focus on January 23: ITI, Cipla to Telecom shares; here are expected 5 Newsmakers of the Day