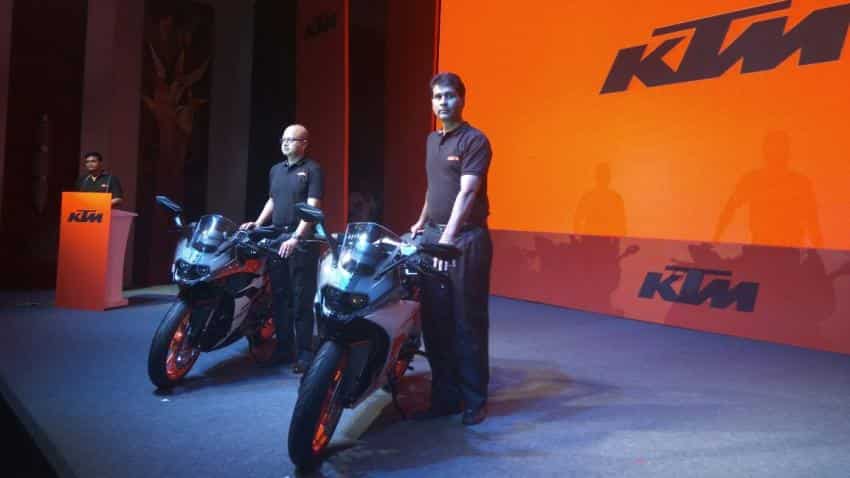 Bajaj Auto on Thursday launched its new range of KTM RC motorcycles in India. The 2017 models are of the KTM RC 390 and KTM RC 200 and was launched at a price of Rs 2.25 lakh and Rs 1.72 lakh (ex-showroom Delhi), respectively.

The new KTM RC 200 and RC 390 come with a BS-IV compliant engine and new paint scheme. There is no mechanical change in RC390 2017. Some of the improvements on the new model include a ride-by-wire tech, slipper clutch and a large 320mm front disk breaks.

The model also has engine control unit (ECU)-based acceleration. Another change in the bike is the side-mounted exhaust instead of the underbelly exhaust in the previous model. It has a new aluminum exhaust muffler which meets the Euro 4 emission norms.

The KTM RC 200 in fact has more changes in its styling and has the similar black and white paint scheme. However, the exhaust in the RC 200 is in the underbelly. The bike comes with an aluminum swingarm and upside down suspension.

Speaking about this Amit Nandi, President (Probiking), Bajaj Auto said, “The new KTM RC 390 is packed to the gills with cutting-edge racing features and the new KTM RC 200 is an exciting upgrade over the previous model. With these upgrades we will strengthen our already dominant position in the premium sports segment.”