The once popular Hyundai i10 has not only been overtaken by the i10 Grand sales but also other cars in its segment from producers such as Maruti Suzuki, Tata Motors and Renault. Hyundai i10 which will be discontinued. Photo: Hyundia official website
Written By: Collin Furtado
RELATED NEWS

Hyundai Motor India on Thursday announced that it has stopped production of its popular hatchback i10 in the country. The car was launched in India in 2007.

The company said that the reason for phasing out the car is to shift focus to more premium and modern products.

Till date, Hyundai has sold a total of 16.95 lakh units of the model in domestic as well as global markets.

The once highly popular i10 however has been seeing a slowdown in sales over the past year. 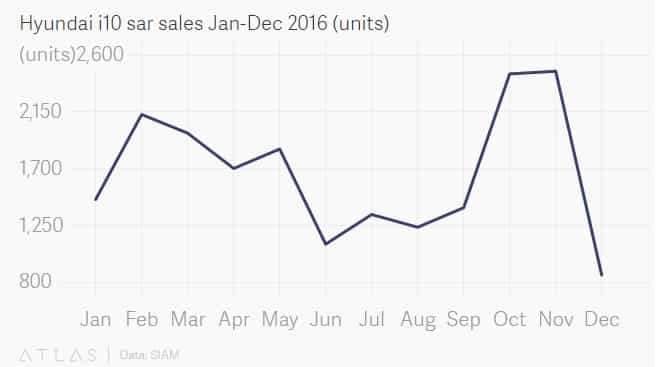 The sales of the i10 started to decline after Hyundai launched the i10 Grand in the middle of 2013. i10 Grand managed to clock over 1 lakh units in sales in just 10 months since its launch.

Although Grand i10 was supposed to replace i10, the company continued to sell i10 for a few more years as demand continued to pour in for the model from various quarters, including fleet operators.

For instance, the i10 Grand in the recent February 2017 sales saw a 44.5% growth in sales in comparison to the same month last year and sold 12,862 units during the month. A month earlier it saw a 31% growth in sales as its sales touched a high of 13,010 units in January 2017. In fact the sales of the i10 Grand registered sales of over 10,000 units consecutively over the last one year.

The reason for Hyundai to also put an end to i10 is its plans to re-introduce an all new Santro into India by 2018. As both the hatchbacks will be in the same price range it would not make sense to keep both in production.

Another competitor car for the i10 has been the Tata Tiago, which despite a rocky start last year, has managed to become the highest sales for Tata Motors over the last few months. In February 2017 its saw a 389% year on year growth in sales as it sold 5,365 units.

Maruti Suzuki's Swift and WagonR, on the other hand, have been one of the most popular cars till date and have clocked in sales of 14,000 units on an average month on month over the last year. Ignis which was launched 2 months ago managed to record sales over 4,000 units in both months.

Renault Kwid too has been one of the most popular cars recently. During February itself its sales rose to 27.8% as it sold 9,648 units during the month.

i10 lost out to the market which have seen newer models come out and take a larger share of the market.