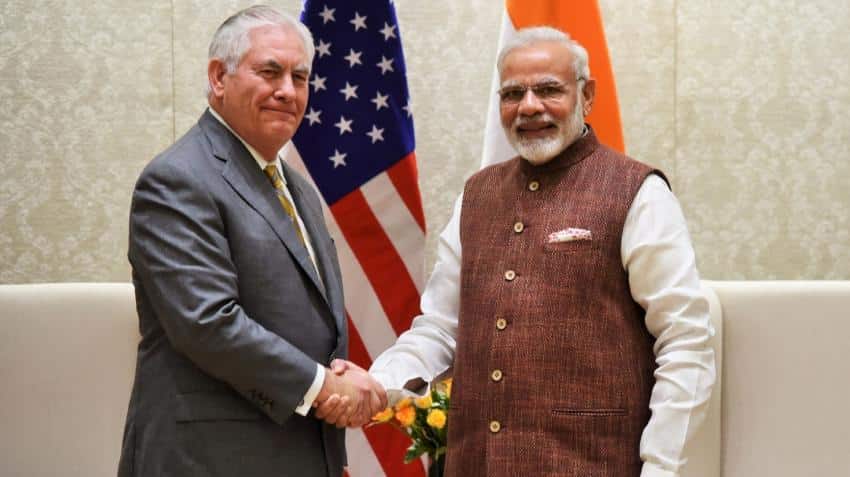 The United States has elevated its engagement with India as part of its effort of free and open Indo-Pacific, Secretary of State Rex Tillerson has said.

"As part of the free and open Indo-Pacific, we have elevated our engagement with India," Tillerson said.

"We've long had a trilateral relationship in the Indo- Pacific between Japan, Australia, and the US, and we're now working towards whether this will become a quad relationship to include India because of the importance of India's rising economy as well and I think shared national security concerns that we have with India," he said.

On America's relationship with China, he said the administration now have a very active mechanism in which it can put complex issues on the table.

"And we have differences, such as the South China Sea and China's building of structures, militarisation of these structures, and how that affects our allies in the region as well in terms of free and open trade," he said.

"As we've said to the Chinese, we hope we can find a way to freeze this particular activity. Whether we can reverse, it remains to seen. But it is not acceptable to us that these islands continue to be developed, and certainly not for military purposes," he said.

"In Southeast Asia, we put forth a policy here not too long ago of a free and open Indo-Pacific, and this was built on the back of some of our views about China's One Belt, One Road policy. China's One Belt, One Road, we understand, is a policy they have to continue their economic development, and our policies do not seek to contain China's economic development," Tillerson said.

Tillerson said the US is paying a close attention to Beijing's 'One Belt, One Road' (OBOR) initiative, but sought to clarify that the Trump administration does not intend to contain China's economic growth.

"But China's economic development, in our view, should take place in the system of international rules and norms, and One Belt, One Road seems to want to define its own rules and norms," he added.

The Secretary of State borrowed a quote from Defence Secretary Jim Mattis: "China has One Belt, One Road; the United States and the global economy has many belts and many roads, and no one country gets to choose the belt or the road.

Tillerson said that a free and open Indo-Pacific means all countries have access to continue their economic development and free access for trade through the region.