US airlines stand by 737 MAX even as some customers, nations reject it

The three U.S. airlines using Boeing Co`s 737 MAX continued to stand by the aircraft on Tuesday, even as some customers, unions  and  politicians questioned its safety after an increasing number of countries banned the plane following a deadly crash in Ethiopia. 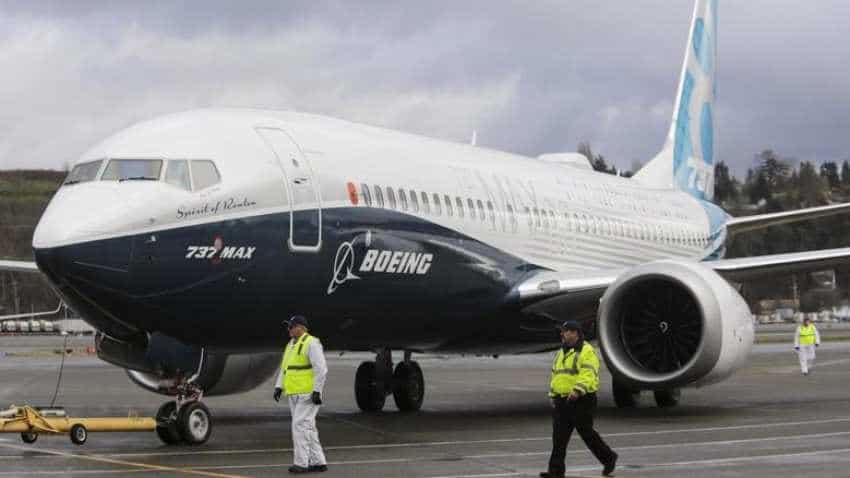 The U.S. Federal Aviation Administration is one of the only major regulators not to suspend 737 MAX flights after Britain and the European Union joined a wave of other suspensions on Tuesday. Image source: Reuters
Written By: Reuters
RELATED NEWS

The three U.S. airlines using Boeing Co`s 737 MAX continued to stand by the aircraft on Tuesday, even as some customers, unions and politicians questioned its safety after an increasing number of countries banned the plane following a deadly crash in Ethiopia.

The U.S. Federal Aviation Administration is one of the only major regulators not to suspend 737 MAX flights after Britain and the European Union joined a wave of other suspensions on Tuesday in the aftermath of two disasters involving the same plane within months.

Southwest Airlines Co, American Airlines Group Inc and United Airlines said they were still confident in their fleets. Southwest and American have both said their fleet data showed the plane was safe.

U.S. Transportation Secretary Elaine Chao flew aboard a Southwest 737 MAX 8 on Tuesday to Washington from Austin, according to two people briefed on the matter. A spokesman for Chao did not immediately comment.

Many potential passengers took to social media to express concerns, asking if they could change their flights and some even asking for cancellation. Southwest Airlines’ Twitter account (@SouthwestAir) was busy with hundreds of customers concerned about the plane.

Andrea Call (@andi_call) tweeted to Southwest that she was traveling with her daughter in May. "I don`t want to be on a Boeing Max 8," she said. The airline responded that it was focused on safety, adding, "Our fleet of Boeing 737 MAX 8 aircraft are operating as planned today and we plan to operate those aircraft going forward." Southwest told Call to contact it 24 hours before her flight to find out what aircraft would be used.

Twitter user Sandy (@nycsandygirl) tweeted that she had called American Airlines to change her flight but was told waivers were unavailable for nonrefundable fares.

"It is well within my right to request a change in aircraft without a change fee when safety concerns have been raised about a particular aircraft. China, Indonesia, Ethiopian Airlines & Cayman Airways have all grounded these aircraft so obviously there is a concern," the Twitter user posted.

A separate union representing United Airlines flight attendants also urged the FAA to ground the jets and conduct an investigation into the 737 MAX.

Pilot unions so far have not joined such requests.

A pilot union, United Master Executive Council, said it has analyzed thousands of safety data points in its 737 MAX 9 operation since May and did not find any performance or mechanical deficiencies.

U.S. Senators Mitt Romney and Elizabeth Warren were the latest politicians to call for the FAA to act. Warren is running for the Democratic presidential nomination.

Senator Richard Blumenthal wrote letters to Parker and the chief executives of Southwest and United urging them to voluntarily ground their 737 MAX aircraft, which includes the MAX 9 as well as the MAX 8.

The FAA and Boeing have said the planes are safe to fly.

With 34 737 MAX 8 jets, Southwest is the largest operator of the aircraft, which it said produces thousands of data points during each flight that are constantly monitored.

"To date, we have operated more than 41,000 flights and have corresponding aircraft data that indicates the effectiveness of our operating standards, procedures, and training," spokeswoman Michelle Agnew said in a statement.

Southwest`s pilot association said on Tuesday it supported the airline`s decision to continue to fly the aircraft, as well as the FAA`s findings to date.WAITING FOR BLACK BOXES

American Airlines said Tuesday the company continues to "believe the Boeing 737 MAX aircraft is safe and that our pilots are well-trained and well-equipped to operate it."

The airline is waiting for findings from the black boxes from Ethiopian Airlines that "will provide a better understanding of the cause of this recent accident." The airline has said extensive flight data collected from its fleet gave it confidence in the safe operation of all its aircraft, including the 737 MAX 8.

American, with 24 MAX 8 planes, said it has been sharing its data with the FAA, in coordination with the Allied Pilots Association, a union that represents American`s pilots.

United Airlines, which does not fly the MAX 8 but operates another model in the series, the MAX 9, also reiterated its confidence in its pilots` "ability to fly the aircraft safely."

"(...) we continue to believe the planes will be found to be safe and the impact on Boeing`s long term operations, backlog, book of business and order flow will prove to be limited," said Jim Corridore, an analyst at investment research firm CFRA who kept his "strong buy" opinion on Boeing.