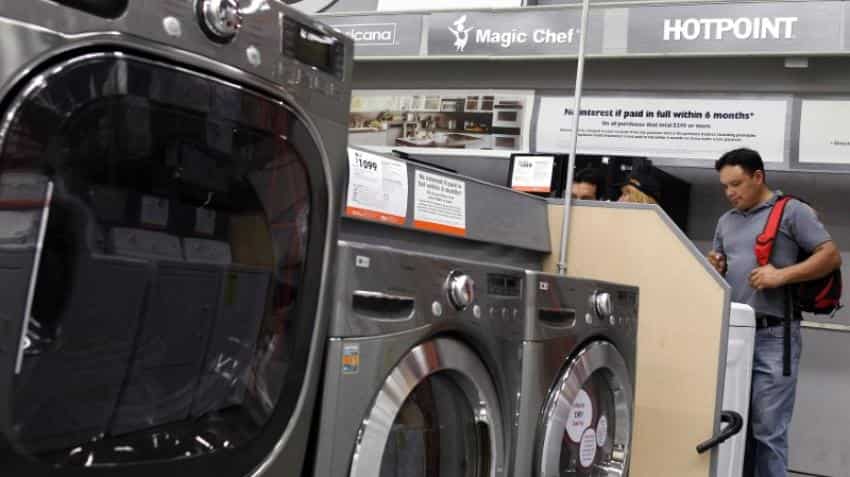 U.S. President Donald Trump slapped steep tariffs on imported washing machines and solar panels on Monday, giving a boost to Whirlpool Corp and dealing a setback to the renewable energy industry in the first of several potential trade restrictions.

The decisions in the two "Section 201" safeguard cases followed findings by the U.S. International Trade Commission that both imported products "are a substantial cause of serious injury to domestic manufacturers," U.S. Trade Representative Robert Lighthizer said in a statement.

The washer tariffs exceeded the harshest recommendations from ITC members, while the solar tariffs were lower than domestic producers had hoped for. The restrictions aim to help domestic manufacturers but drew complaints that consumer costs for new washers and solar installations will rise.

A 30 percent tariff will be imposed on imported solar cells and modules in the first year, with the tariffs declining to 15 percent by the fourth year. The tariff allows 2.5 gigawatts of unassembled solar cells to be imported tariff-free in each year.

"By enforcing our existing trade laws, President Trump has ensured American workers will compete on a level playing field with their foreign counterparts," Whirlpool Chairman Jeff Fettig said in a statement.

The move punishes Samsung, which recently began washer production in South Carolina, and LG, which is building a washer factory in Tennessee.

"This tariff is a tax on every consumer who wants to buy a washing machine. Everyone will pay more, with fewer choices," Samsung said in a statement.

LG Electronics said that the decision will hinder the ramp-up and employment prospects of its new plant, which will not begin production until late 2018 or early 2019.

Trump ignored a recommendation from the ITC to exclude South Korean-produced washers from LG from the tariffs, as prior anti-dumping duties on these machines have been dropped. The decision could also hurt retailer Sears Holdings

LG shares fell as much as 5 percent in Seoul trading against the wider market’s <.KS11> 0.4 percent gain. Shares in Samsung Elec were up 0.83 percent.BLOW TO RENEWABLE ENERGY

The tariffs are expected to slow a shift to renewable energy in the United States, just as solar was becoming cost competitive with electricity generated from fossil fuels like coal, an industry that Trump has pledged to protect.

MJ Shiao, head of renewable energy research for Wood Mackenzie, said the tariffs would likely reduce projected U.S. solar installations by 10 to 15 percent over the next five years.

"It is a significant impact, but certainly not destructive to the end market,” Shiao told Reuters.

The domestic solar panel producers who sought the trade remedies wanted tariffs of 50 percent - the highest allowed under law. Petitioners Suniva and SolarWorld

The U.S. solar trade group, the Solar Energy Industries Association, campaigned against the tariffs and estimated the decision would create a "crisis" for the burgeoning industry and result in the loss of 23,000 U.S. jobs this year as billions of dollars in solar investments are cancelled.

Suniva, majority-owned by Hong Kong-listed Shunfeng International Clean Energy Ltd <1169.HK>, applauded the decision, saying that Trump "is sending a message that American innovation and manufacturing will not be bullied out of existence without a fight."FIRST OF SEVERAL POTENTIAL ACTIONS

The decisions were the first of several potential tariff actions that Trump may take in the coming weeks and months. He is considering recommendations on import restrictions for steel and aluminium on national security grounds under a 1962 trade law and tariffs or other trade sanctions against China over its intellectual property practices.

The intellectual property, washer and solar panel probes were done under a 1974 trade law that has been seldom invoked since the World Trade Organization was launched in 1995.