Triumph launched its brand of motorcycles in India in 2013, but started selling them only from 2014. The company has sold some 4,500 bikes in the Indian markets since its launch. 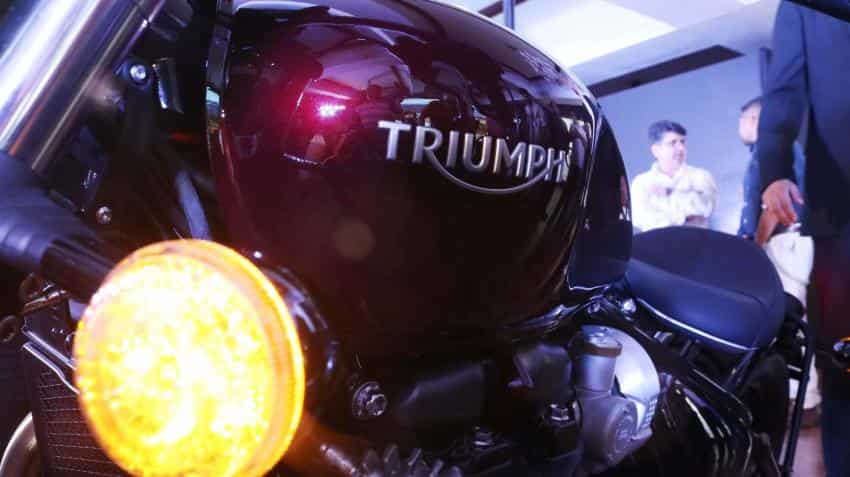 The British niche motorcycle maker Triumph, which has forged global partnership with Bajaj Auto to co-develop bikes, today said it is looking to sell around 1,300 units of its brand of motorcycles this year.
The Pune-based auto maker Bajaj and Triumph Motorcycles had in August this year announced a non-equity global partnership for design, development and distribution of mid-range motorcycles, and the first co-developed bike is expected to be rolled out in 2021.
Triumph Motorcycle is targeting to sell 1,300 units of its bikes during the current year in India with 10-15 per cent growth, Managing Director Vimal Sumbly told PTI on the eve of the India Bike Week-2017 which will be kicked off in Goa tomorrow.
Triumph launched its brand of motorcycles in India in 2013, but started selling them only from 2014.
The company has sold some 4,500 bikes in the Indian markets since its launch, Sumbly said.
Triumph's portfolio includes high-powered bikes, such as the Rocket III, Daytona 200, SuperSports Daytona 675R, Tiger 800 and the iconic Triumph Bonneville family, among others.
Sumbly also said that with the tie-up, the company expects to break into a new segment of riders through their 250-700 cc premium bikes.
The tie-up will make premium motorcycles available at an affordable price for the bike enthusiasts, he said.
Sumbly said that the to-be-launched bikes would be in mid-segment ones with 250-700 cc capacity which would be branded as 'Triumph' though Bajaj Auto is collaborating to manufacture them.
"There is lot of collaboration between Triumph and Bajaj Auto and there is lot of synergy between two brands and thereby you will have a new set of customers in India with new set of bikes, Sumbly added.
"The association between the two bike manufacturers is expected to make the prices of bikes in this segment more affordable," he said.