While optimism about a tax overhaul has helped push the U.S. stock market up for most of this year, the administration of President Donald Trump, a Republican, is still seeking its first major legislative win after almost a year in office. 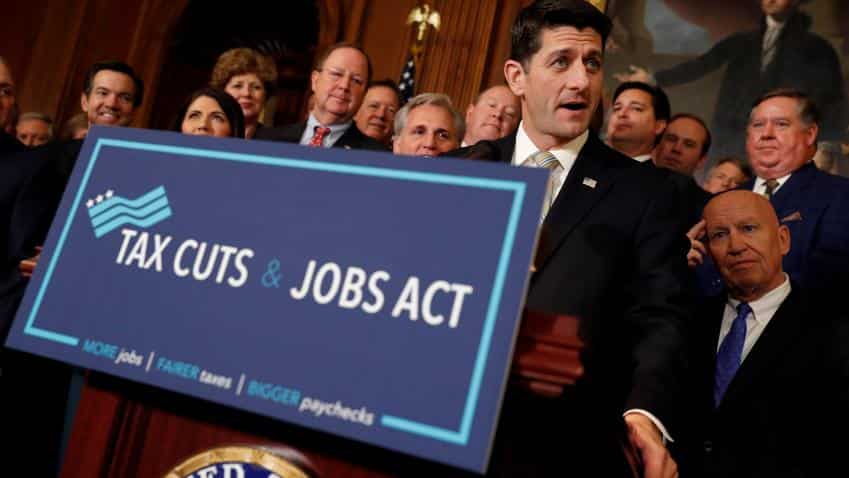 Speaker of the House Paul Ryan speaks at news conference announcing the passage of the "Tax Cuts and Jobs Act" at the U.S. Capitol in Washington. Photo: Reuters
Written By: Reuters
RELATED NEWS

U.S. Republicans are not expected to push major tax cuts through Congress this year, according to a majority of economists in a Reuters poll, who in any case were skeptical that the legislation would provide a significant boost to the economy.

While optimism about a tax overhaul has helped push the U.S. stock market up for most of this year, the administration of President Donald Trump, a Republican, is still seeking its first major legislative win after almost a year in office.

Skepticism about major tax cuts has been growing over the past two weeks, causing share prices to wobble.

The House of Representatives on Thursday approved a package of tax reductions estimated to raise the federal deficit by nearly $1.5 trillion over a decade. The Senate, where the Republican majority is slimmer, will be the focus for debate.

Nearly two-thirds of the more than 60 economists who answered an extra question in the Nov. 13-17 poll, which mostly took place before the tax cuts passed the House, said they were not confident the administration would get the legislation passed this year.

"We feel that if it does pass next year, it is likely to be less ambitious and more focused on temporary cuts than reform," Ajay Rajadhyaksha, head of macro research at Barclays, wrote in a note.

The effect of tax cuts would probably be muted because of a lack of wage growth and a high level of employment, he added.

In a Reuters poll last month, a strong majority of economists said the U.S. economy did not need a big fiscal stimulus at this late stage of the business cycle.

This month`s poll of more than 100 economists showed most respondents had upgraded their near-term forecasts for the U.S. economy, which they expect to grow just above the roughly 2 percent trend rate over the next two years but with muted inflation.

When asked what the economy needs most, the top pick was increased infrastructure spending. Nearly as many said the United States ought to join the Trans-Pacific Partnership trade agreement - Trump pulled the nation out of negotiations just days after becoming president - as those choosing tax cuts.

"It is hard to say with any level of confidence until we see a final plan (for tax cuts) what really are the benefits to the (economic) outlook," said Sam Bullard, senior economist at Wells Fargo in Charlotte, North Carolina.

"If we don`t get one, clearly there would be a response (from the financial markets) to a failure to not pass some kind of tax legislation. But if we get it, it would support the `glass half full` levels of sentiment we have seen."

In the meantime, most respondents did not expect the core PCE price index, the Federal Reserve`s preferred gauge of inflation, to reach the central bank`s target until the second quarter of 2019.

At last measure, it was no higher than it was just before the Fed first started raising interest rates from zero nearly two years ago.

The poll still showed the Fed raising rates by 25 basis points more to 1.25-1.50 percent in December, with two increases next year - less than the three the central bank is projecting.UNLIKELY RECESSION

While there are few signs of any economic slowdown in broad economic data, the current cycle is mature. Movements in the U.S. government bond market have grabbed attention in recent weeks as well, suggesting some kind of slowdown may be at hand.

Two-year U.S. Treasury yields have hit a nine-year high on expectations for higher interest rates, but a weak inflation outlook has pushed the yield curve to its flattest in a decade.

The gap between two-year and 10-year yields contracted to just above 63 basis points on Thursday. That was the tightest since November 2007, not long before the last recession took hold.

While the current yield curve is not inverted, which is often viewed as a recessionary warning sign, it has flattened by more than 60 basis points in less than a year.

Economists polled by Reuters gave only a median 10 percent chance of a U.S. recession over the coming year. The highest probability provided was 40 percent.

Wells Fargo`s Bullard said economic data had been strengthening over the past couple of quarters.

"That is certainly supportive to sustained moderate U.S. economic expansion," Bullard said. "But yet financial markets, at least the yield curve, are reflecting something that suggests that maybe there are some signals out there that need to be paid attention to, and clearly not everything is right."