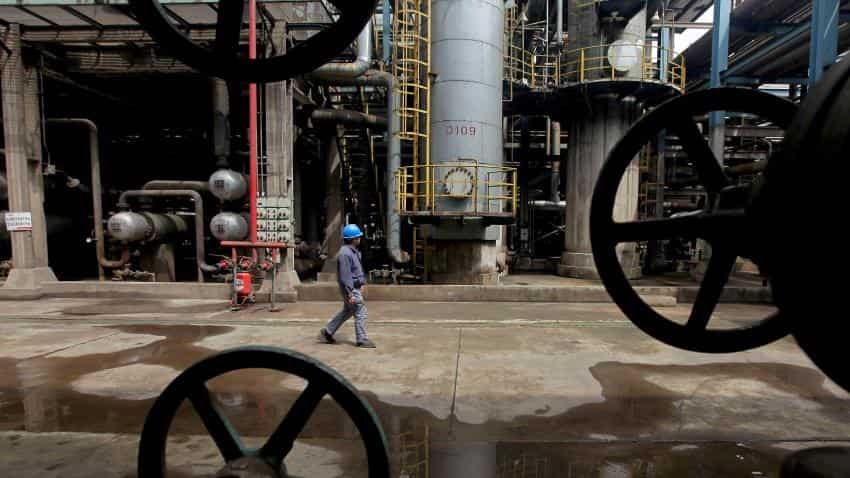 FILE PHOTO: A worker walks past oil pipes at a refinery in Wuhan. Image Source: Reuters

Oil prices on Thursday hit their highest since December, 2014, pushed up after U.S. crude inventories posted a 10th straight week of declines and as the dollar continued to weaken.

Both crude benchmarks are up by almost 60 percent since the middle of last year.

Price support has also been coming from supply restrictions led by a group of producers around the Organization of the Petroleum Exporting Countries (OPEC) and Russia, which started last year and are set to last throughout 2018.

"The Saudi`s and Russians continue to work together to talk the oil market higher and last night, the countries` two oil ministers said they were working together on other longer-term projects as well," said Greg McKenna, chief market strategist at futures brokerage AxiTrader.

"That, and the USD fall, along with another inventory draw combined to drive (crude) up," he added.

That`s the lowest seasonal level since 2015 and below the U.S. five-year average around 420 million barrels.

In foreign exchange markets, the U.S. dollar hit its lowest level since December, 2014 against a basket of other leading currencies <.DXY>.

A weakening dollar often results in financial traders taking investment out of currency markets and into commodity futures like crude.

Analysts said that rising oil prices would likely start to have an inflationary effect.

"Higher oil prices will eventually be reflected in higher consumer prices as the costs of transport of most goods will rise," said William O`Loughlin, investment analyst at Australia`s Rivkin Securities.

Looming over the generally bullish oil market has been U.S. oil production, which is edging ever more closely towards 10 million barrels per day (bpd), hitting 9.88 million bpd last week.

U.S. output has grown by more than 17 percent since mid-2016, and is now on par with that of top exporter Saudi Arabia.