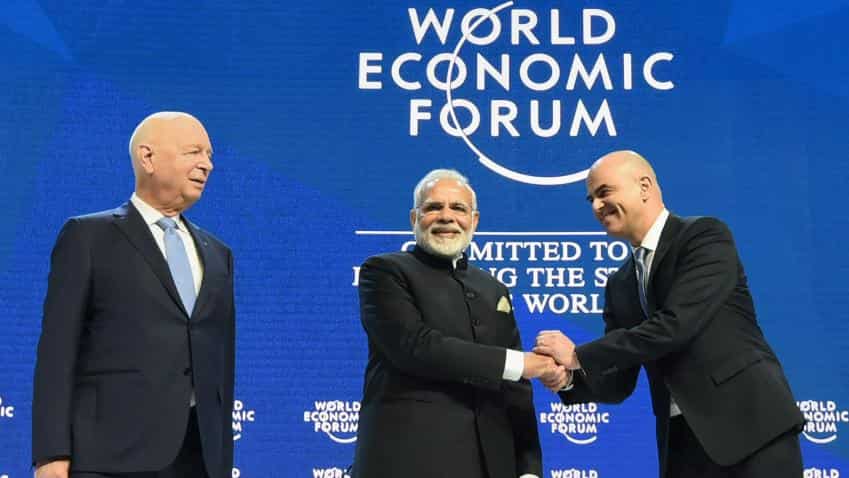 Sending out a strong message against protectionism and inward-focused economic policies, Prime Minister Narendra Modi today said such tendencies can be as dangerous as terrorism and climate change as he pitched for creating a "heaven of freedom" free from divisions.

In a nearly-hour long speech delivered in Hindi, the prime minister sought to hard sell India as an investment destination, saying those wanting wealth with wellness and peace with prosperity should come to the country.

Seen as an apparent reference to policies like America First, especially since US President Donald Trump would be coming to Davos later this week, Modi said "many countries are becoming inward focused and globalisation is shrinking and such tendencies can't be considered lesser risk than terrorism or climate change".

Protectionism is rearing its head and there is risk of new tariff and non-tariff barriers coming up, the prime minister said, as he mentioned that division is not the solution to this problem of anti-globalisation.

Noting that in an interconnected world, globalisation is losing its lustre, the prime minister wondered "do global organisations created after the Second World War really reflect the aspirations and dreams of mankind today? With respect to the developing countries there is a very big gap".

Asserting that India is proud of its democracy and diversity, Modi said the country has always contributed towards global peace as well as believed in values of integration and unity.

Stating that terrorism is dangerous, the prime minister remarked that worse is when people say there is a difference between 'good' and 'bad' terror, besides noting that it is painful to see some youngsters getting radicalised.

The prime minister also emphasised that a predictable, stable, transparent and progressive India is good news in an otherwise uncertain global environment.

"Let us create a 'heaven of freedom', where there is cooperation and not division, fractures," Modi told the gathering even as he stated that issues of peace, security and stability have emerged as serious global challenges.

The theme of this year's summit is 'Creating a Shared Future in a Fractured World' and referring to it, Modi said it was relevant for him as Indians have always believed in uniting and not dividing people.

"There are many questions before us that require answer for generations to come. Is the existing international system promoting fractures and rift in this world? Can we remove these rifts and distances to make a good shared future?" the prime minister said.

"We always talk about 'Vasudhaiva Kutumbakam' (world is one family)," the prime minister said, adding that the problem today is lack of consensus to tackle the problems.

Citing Mahatma Gandhi, the prime minister noted that Gandhi had said, "I don't want doors and windows of my house to be closed and I want winds of cultures of all countries to come inside but I won't accept it if that uproots my own culture".

The prime minister also quoted Sanskrit shlokas to emphasise that "we are children of mother earth".

Hard selling India as an investment destination at the WEF, Modi said the government is following the principle of reform, perform and transform and that the country is moving towards becoming a USD 5 trillion economy by 2025.

"We have made it so easier to invest in India, manufacture in India and work in India. We have decided to uproot licence and permit Raj. We are replacing red tape with red carpet," he added.

The prime minister said data is a huge wealth and is creating big opportunities as well as challenges.

While referring to the International Solar Alliance, Modi said India aims to add 175 GW renewable energy by 2022 and in the last about three years, 60 GW has been added.

In a release, the WEF said Modi held up his country - its ancient traditions as well as its democratic present - as a model in addressing the great challenges facing the world in 2018.

"Together we can! Prime Minister Narendra Modi with Indian CEOs present at the WEF working hand in hand towards a brighter future for the country," Ministry of External Affairs spokesperson tweeted with the hashtag IndiaMeansBusiness, the campaign being run by India in Davos this year.