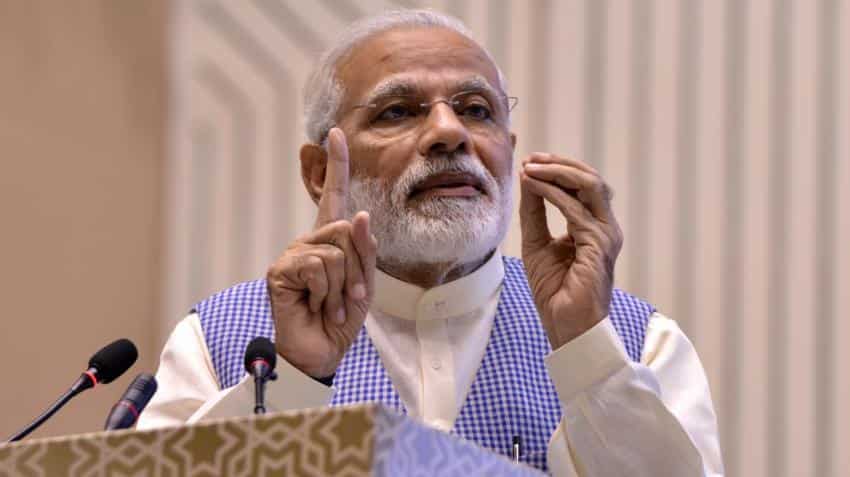 Prime Minister Narendra Modi today hinted at a crackdown on 'benami' properties, and said the Congress is worried as such assets of its leaders will not be spared in his government's action.

Launching a stinging attack on the opposition party over corruption at an election rally in Sundernagar, Modi said the Congress' campaign against demonetisation was driven by its attempts to mislead the people and create an atmosphere against him before he can raise a "storm" over benami assets.

"The time has come to return to the poor what had been robbed of them.... I am going to create a situation that they (Congress leaders) would not be able to reclaim their benami assets," he said.

Heaping scorn on the Congress over its decision to observe the first anniversary of demonetisation on November 8 as black day, he said it was actually "blackmoney day" for the opposition party.

While addressing rallies in the poll-bound state, Modi said the Congress would burn his effigies on November 8 because his sin was that he was fighting corruption.

The opposition party has decided to observe November 8 as a black day to protest demonetisation.

Modi said by lighting some candles and instigating some people, they would not be able to stop him.

The prime minister said he will not be cowed down by these tactics as he was a disciple of Sardar Patel.

"I tried to get some information from Congress leaders...

some (Congress leaders) lost their bags of Rs 500 notes, some of Rs 1,000 notes. In the meantime, Modi has come with benami law. Their worry is that Modi will start showing results.

"Their worry is that the benami assets like land, flats, shops they have kept hidden like Rs 500 and Rs 1000 notes are not going to be spared. Therefore, they are creating an atmosphere so that before Modi raises a storm over benami assets, they observe blackmoney day and mislead the people," he said.

In a 'benami' property, the person who pays for it buys it in the name of some other person.

There would be many Congress leaders, the prime minister claimed, who would have purchased assets like cars and houses in the names of their drivers and cooks.

He would tell these people that they should not return them to these leaders if they are asked to transfer their ownership, Modi said.

"I am going to create a situation that they would not be able to reclaim it. This is people's money. This has been robbed of the masses and would be used for their welfare," he said.

Modi said people had given him power in 2014 to fight corruption and he would continue to do so.

Mocking at the Congress' campaign against demonetisation, he said that God gives at times the opposition party "wisdom" which comes to his use.

Referring to alleged scams that happened under the UPA, he questioned the Congress's "audacity" to observe 'black day' on November 8.

On the issue of honesty, Indians would not trust the Congress even after 100 years, such are its "sins", he claimed.

Earlier at a rally in Kangra, he asserted that people had voted him to power in 2014 not to enjoy himself but to fight corruption and change the country's fate.

The prime minister said he was resolutely fighting graft which had flourished under the patronage of previous governments.

He said the poor and the middle class were back to work after demonetisation but the dishonest people were angry with him and wanted to seek revenge as he forced them to deposit their bagfuls of cash with banks.

"You tell me if I should fight against corruption or not.

Honest people should be given strength or not. If am doing this work, then is it a sin?" he said at his rallies in the poll-bound state.

Modi also likened the Congress to termites, and exhorted the people to finish it off by handing over three-fourth majority to the BJP in the November 9 Assembly election.