Investors and analysts took the swell of interest, alongside the company`s better-than-expected sales forecast for the upcoming holiday shopping season, as signs that Apple could be the first ever company worth $1 trillion. 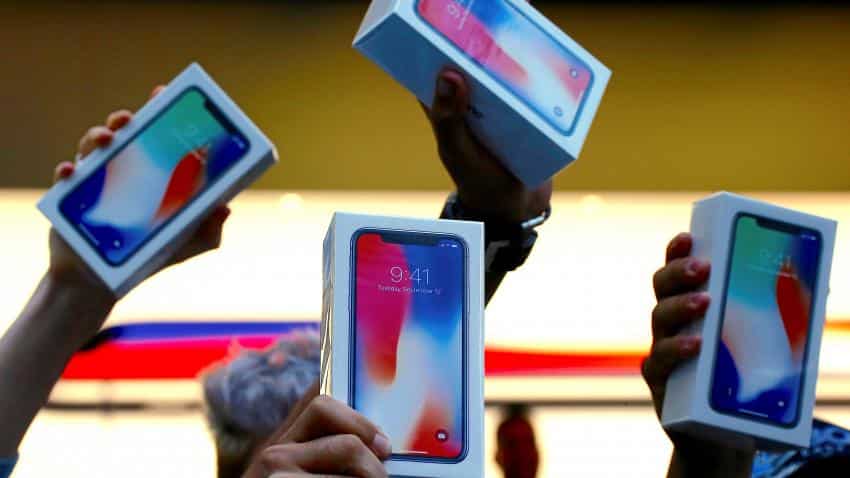 The first customers to buy the iPhone X hold it aloft during the global launch of the new Apple product in central Sydney. Photo: Reuters
Written By: Reuters
RELATED NEWS

Your dream discount on Apple iPhone X: Here's how to get Rs 22,500 cashback

Want iPhone X? Get it for just around Rs 4,299, courtesy RentoMojo

Shoppers surged into Apple Inc stores across the world on Friday to buy the new iPhone X, signalling stronger demand for the 10th anniversary version of the premium smartphone than the last two iterations.

Investors and analysts took the swell of interest, alongside the company`s better-than-expected sales forecast for the upcoming holiday shopping season, as signs that Apple could be the first ever company worth $1 trillion.

"I can’t wait to get to my office and plug it in, back it up and play around with it," said Jordan Shapiro, a 34-year-old recruiter from New Jersey who was one of the first to get into Apple`s flagship store on Manhattan`s Fifth Avenue, at the head of a line that stretched for a block.

Jasmine Rivera, a 16-year-old from Las Vegas, said getting one of the new phones was the highlight of her New York trip with her aunt.

"I’m so excited and can’t wait to show this to my friends," she said. "I’m especially excited about the camera quality and facial recognition."

The glass-and-stainless-steel device that Apple Chief Executive Tim Cook has billed as "the biggest leap forward since the original iPhone," starts at $999 in the United States.

The handset features an edge-to-edge display designed for deeper colour rendition and an innovative camera that uses facial recognition to unlock and operate the phone.

Cook appeared on TV greeting the first customers in line at the company`s store in Palo Alto, California, about a half-hour drive from Apple`s headquarters in Cupertino.

In nearby San Francisco, about 250 people lined up outside the Apple store in the Union Square shopping district.

"I’m feeling good, but my socks are wet," said Ross Hendrix, 20, one of the first in line after camping out on the sidewalk despite a light rain on Thursday night.GLOBAL EXCITEMENT

Similar scenes of excitement occurred earlier in the day in Asia and Europe.

In Australia, around 400 people queued outside Apple`s main store in central Sydney to pay A$1,579 ($1,218) for the new phone. Just 30 turned up for the September release of the iPhone 8, an incremental update of the iPhone 7.

"It`s beautiful bro, what a feeling, I`m excited," builder Bishoy Behman, 18, told Reuters after picking up two iPhone X as the first in line. He said he camped outside the store for a week before paying to improve his place in the queue overnight.

In Apple`s Omotesando store in Tokyo, some 550 people were waiting in a line stretching to around 600 metres.

"I`m going home, and after having a rest, I`d like to have fun (with the phone)," said first-in-line Yamaura, a 21-year-old college student who spent six days in the queue.

In Europe, Apple stores in Amsterdam, Berlin and London saw lines of several hundred fans, while smaller, more subdued crowds were observed at stores in Frankfurt and Paris.

Arbitrage traders were also in line in an attempt to take advantage of the strong demand. In Hong Kong, some buyers quickly resold iPhone X handsets for a profit, but the resale premium eased as waiting times fell and supply concerns eased.

Analysts had expressed concern that supply issues might stop Apple satisfying early demand. The camera, for instance, has never before been manufactured in the volume Apple demands.

But Chief Financial Officer Luca Maestri told Reuters on Thursday that Apple was "quite happy" with how manufacturing of the iPhone X was progressing.

"Production is growing every week, and that`s very, very important during a ramp period," he said.

Demand and supply for the iPhone X appear to be coming back into balance, according to Apple`s online store. While last week users trying to order the iPhone X were told they faced waits up to five to six weeks, these delays are now three to four weeks.

The rush of interest in the new phone came after Apple issued an upbeat sales forecast for the year-end holiday shopping season on Thursday.

Friday`s lines signalled the company was "on track for a pretty good replacement cycle" said Edison Investment Research analyst Richard Windsor, but he questioned whether the new model sales will be as large as prior iPhone upgrade cycles.

"We do not think that the iPhone X will offer a cycle nearly as big as the iPhone 6 and my concern is that this is what the market is looking for," said Windsor, who actively tracks all the major players in the global smartphone industry. ($1 = 1.2960 Australian dollars)

Your dream discount on Apple iPhone X: Here's how to get Rs 22,500 cashback

Want iPhone X? Get it for just around Rs 4,299, courtesy RentoMojo