Japan's Nikkei raced up 1% to its highest since 1996 after Prime Minister Abe looked to have easily won in national elections over the weekend. 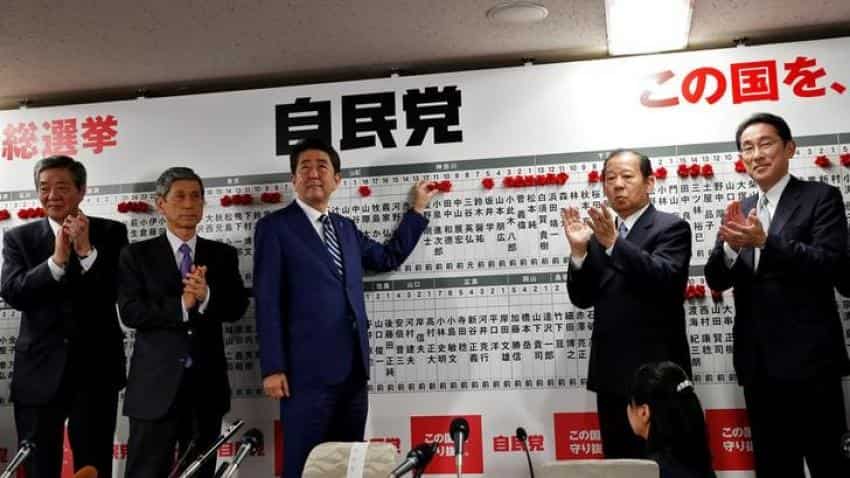 Japan's PM Abe, leader of the Liberal Democratic Party, puts a rosette on the name of a candidate who is expected to win the lower house election, as his party''s lawmakers applaud at the LDP headquarters in Tokyo. Photo: Reuters
Written By: Reuters
RELATED NEWS

Indian markets open on a negative note in morning session

Toyota to halt operations at all Japan plants as typhoon precaution

Japanese shares jumped on a weaker yen on Monday as an election win for Shinzo Abe's ruling bloc gave a green light for more super-easy policy stimulus, while the euro eased as Spain's constitutional crisis aggravated concerns about political unity in the region.

The US dollar was the major beneficiary as President Donald Trump and Republicans took a small step toward tax cuts, boosting Wall Street stocks and lifting bond yields.

Japan's Nikkei raced up 1% to its highest since 1996 after Prime Minister Abe looked to have easily won in national elections over the weekend.

Investors assumed the victory would allow the Bank of Japan to continue with massive monetary easing that depresses bond yields and the yen, even as the U.S. Federal Reserve seems determined to hike rates again in December.

"This should extend the lifespan of `Abenomics`, including the BOJ`s mega stimulus," wrote analysts at the Blackrock Investment Institute.

"We see the outcome as a mild positive for Japanese equities, and as a mild negative for the yen and Japanese government bonds."

The yen even slipped against the euro, which was having its own troubles as the Spanish government urged Catalans to accept its decision to dismiss their secessionist leadership and to take control of the restive region.

The nation`s biggest political crisis in decades enters a decisive week as Madrid tries to impose its control, although investors have so far assumed the political strife would not spread elsewhere in the European Union.

It faces another hurdle on Thursday when the European Central Bank meets amid much talk it will cut back the amount of assets it buys every month, but also extend the programme.

"As we have argued for some time now, the length of time the (quantitative easing) programme runs for matters more than monthly size," said analysts at RBC Capital Markets.

"So while we look for a reduction by at least 30 billion euros in net terms ... we also expect that the ECB will keep the programme open ended."

Asian share markets could get a tailwind from Wall Street's record finish on Friday when the passage of a US Senate budget resolution bolstered hopes that President Trump's tax-cut plan may move forward.

Early Monday, MSCI`s broadest index of Asia-Pacific shares outside Japan was a whisker firmer while South Korea put on 0.3%.

Oil prices started firmer on Monday following a sharp decline in Iraqi crude exports due to tensions in the Kurdistan region.

Indian markets open on a negative note in morning session

Toyota to halt operations at all Japan plants as typhoon precaution