Jet Airways: SBI Capital Markets, which had issued the expressions of interest (EoI) on April 8, extended the deadline for submission of initial bids to April 12. 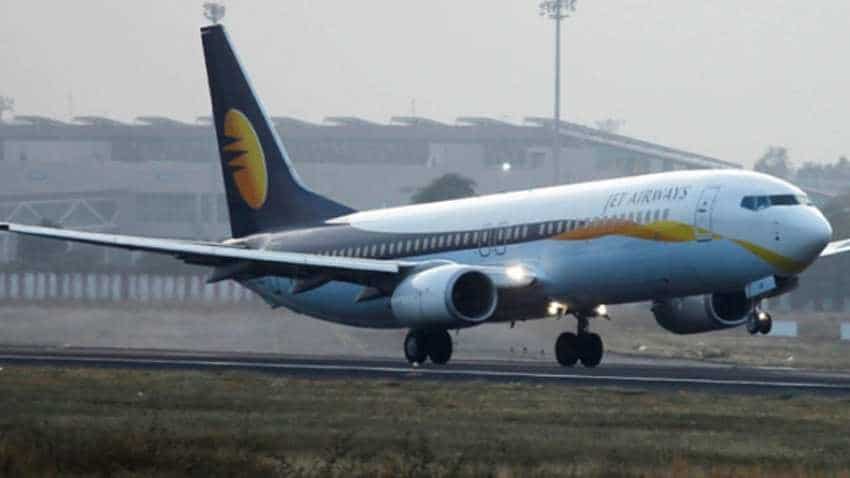 Jet Airways was forced to delay its Amsterdam-Mumbai flight (9W231) after a European cargo agent seized one of its B777 for non-payment of the dues to his company. Reuters
Written By: PTI
RELATED NEWS

Cash-starved Jet Airways flew into deeper troubles Wednesday after IndianOil stopped fuel supplies, a cargo agent seized a Boeing plane in Amsterdam and its lenders extended the deadline for stake sale bids by two more days. Meanwhile, the regulator DGCA has de-registered seven of Jet's Boeing 737-800 aircraft and allowed their lessors to take the planes out of the country so that they can be leased to other airlines.

Cash-drought has forced the airline to default on several payment obligations such as to the banks, aircraft lessors and other vendors besides non-payment of March salaries to its 16,000 employees.

Its pilots, who along with engineers and senior management have not been paid since January had on Tuesday sent a legal notice to the management which is currently being headed by the lenders led by State Bank.

"We stopped fuel supplies to Jet Airways across the country from 3 pm Wednesday. The action came following the airline breaching its bank guarantee limits with the company," an Indian Oil Corporation official said.

This was the third time since last Thursday that the oil company stopped supplying fuel to the crumbling carrier. But late in the evening, IOC confirmed that the supplies were resumed.

In another development, SBI Capital Markets, which had issued the expressions of interest (EoI) on April 8, extended the deadline for submission of initial bids to April 12.

Potential bidders can send their queries till April 11, it said hours before the Wednesday deadline for the submission of bids was to expire.

"The qualified bidders will be expected to submit their respective binding bid(s) latest by April 30, 2019 subject to the terms set out under the bid document," SBI Capital Markets said in a notice posted on its website without attributing any reasons though.

Earlier in the day, SBI Caps had also issued a set of clarifications related to the EoI documents, including that bidders in a consortium needed to furnish solvency certificates individually.

"Bidders are required to provide the solvency certificate ... on their letterhead and certified by managing director/full time director/CEO of the bidder or a person holding an equivalent position in the bidder," SBI Caps said in a separate notice.

In the case of consortium, each member has to submit solvency certificate, which is proof of an entity's financial stability.

As part of the debt resolution plan for the carrier, the lenders are looking to restructure "existing facilities and infusion of funds by way of loans or acquisition/ subscription of up to 75 percent of equity share capital of the company".

In another development, the airline was forced to delay its Amsterdam-Mumbai flight (9W231) after a European cargo agent seized one of its B777 for non-payment of the dues to his company.

"The cargo agent seized Boeing 777-300 ER (VT-JEW) of Jet Airways at the Amsterdam airport as the airline could not clear his dues," the airline source told .