Gold edges down on caution ahead of key cenbank meetings 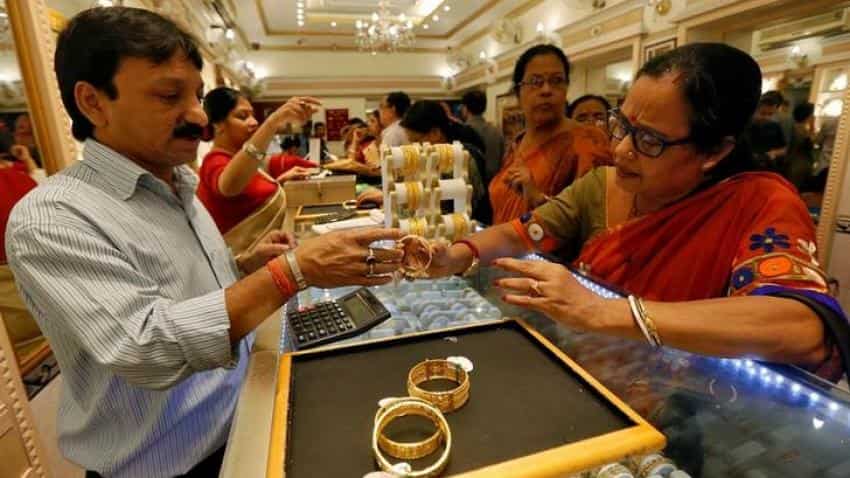 FILE PHOTO - A salesman shows gold bangles to a customer at a jewellery showroom during Dhanteras in Kolkata. Pic: Reuters

Gold inched lower on Monday as investors remained cautious ahead of policy meetings of three major central banks and the naming of the next U.S. Federal Reserve chair.

The market is awaiting cues from the meetings of the Federal Open Market Committee (FOMC) and central banks of England and Japan.

U.S President Donald Trump is also expected to announce the next head of the Federal Reserve, amid speculations that governor Jerome Powell could be the favoured candidate.

"The week is very data heavy, with many tier 1 central bank decisions, PMI`s and other data culminating in Friday`s non-farm payrolls," said Jeffrey Halley, a senior market analyst with OANDA.

"With a dovish ECB and Bank of Canada followed by impressive U.S. GDP data last week, we would expect the dollar to remain on the front foot and gold to struggle," he added.

"The developed economies are hinting at a more hawkish stance. For the rest of this week, market watchers will watch out for the rhetoric given by the FOMC, Bank of England and the Bank of Japan," OCBC analyst Barnabas Gan said.

Meanwhile, Trump is leaning towards nominating Federal Reserve Governor Jerome Powell, from a short list of five candidates, to be the next head of the U.S. central bank, two sources familiar with the matter said on Friday.

"Powell is said to be the front-runner right now and is being viewed by the markets as coming from the dovish/(Janet) Yellen camp, so certainly his appointment could cool the rate and dollar rally heading into November," INTL FCStone analyst Edward Meir said in a note.

The dollar index softened against a basket of currencies, while Asian shares climbed, with MSCI`s broadest index of Asia-Pacific shares outside Japan gaining 0.5 percent.

Spot gold may bounce moderately to a resistance at $1,278 per ounce before falling again, according to Reuters technical analyst Wang Tao.

Among other precious metals, silver slipped 0.2 percent to $16.78 an ounce.