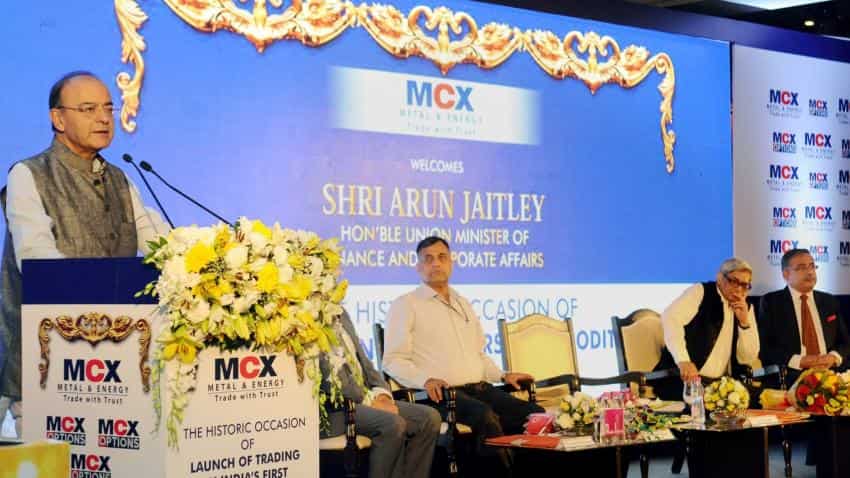 According to the World Bank, India's rank on 'ease of doing business' scale has risen from 130th to 100th this year, helped by a slew of reforms in taxation, licensing, investor protection and bankruptcy resolution.

Addressing a press conference minutes after the World Bank ranking was made public, Jaitley said India is the only major country named for pursuing structural reforms.

"In 2014, we were 142nd and then (in) last two years, we improved to 131st and 130th. These are not generalised rankings. It happened in specific areas and they take tough parameters for that ranking," he said.

The "highest jump" in ranking was possible as significant improvements in all the 10 judging parameters were made in last 3-4 years "so that it becomes easy to do business in India," he said.

The World Bank, he said, has named 10 countries where structural reforms have been taken. "India is one of them." Jaitley said that in 3 years the ranking has improved from 142nd to 100th and sufficient work is ongoing in areas that India lags behind. "There is a reason to believe that we have a capacity to further significantly improve our position," he said.

The World Bank says India still lags in areas such as starting a business, enforcing contracts and dealing with construction permits.

It takes 30 days now to register a new business, down from 127 days 15 years ago, but "the number of procedures is still cumbersome for local entrepreneurs who still need to go through 12 procedures", it said.

"The Prime Minister said our target should be to take India immediately into first 50. I believe this is doable and therefore these remaining 3-4 areas where work has to be done we will be pushing it with all the greater force," he said.

Elaborating on the ranking, he said there has been significant improvement parameters such as protecting minority investors interest after changes were made in company law. "We are now ranked 4th in the world. This is a biggest jump in this field."

In availability of credit, India is ranked 29th. "Biggest jump is that improvements which we have done on the taxation front. Till last year, out of 189 nations, we were 172nd. It means paying taxes were very cumbersome process and we were down. But this year we have moved up 53 places," he said.

Also, with the enactment of the new bankruptcy law, India's ranking on insolvency resolution has also improved.

The ranking does not include the impact implementation of Goods and Services Tax (GST) has created as the cut off for judging the business environment was June 1. "In the coming years, we are expecting to get the credit for this," he said.

Besides, there are some areas where the government has done a lot of work and work was still in progress, which will get reflected in numbers in coming 1-2 years, he said.

Giving examples, he said India is ranked low at 164th in enforcement of contracts but with arbitration act will help improve this.

Similarly, states are being impressed upon to give building construction permits online and fast permissions are handed out.

"One reform they have not factored in is starting a new business. In this we are at 156th position and now we have created a provision in the company act.... this reform has not been fully factored in ranking and I am sure in future they will do," he said.

India has been ranked 156th in the latest ranking.

"Work is in progress and I think if we are able to expedite the work over the next few months in these areas, there is a huge scope for us to jump up from 100," he said.

Jaitley said the government was seriously taking up the 3-4 issues where India still lags behind so that in next 1-2 years there is an improvement of 20-30 points in the ranking.

"If you see the first available data of August and now September, I think every data that is coming out seems to be in the more positive zone," he said.

The finance minister said that reforms are a continuous process.

"The 3-4 areas where we haven't been treated very high are all areas where significant amount of work is in progress and once its impact is shown to the ground, I'm sure it will be taken into consideration in next year's ranking," he said.