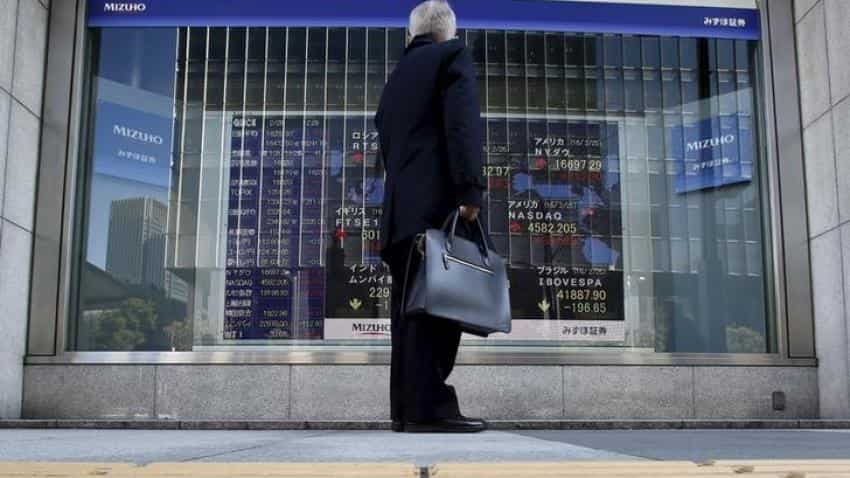 A pedestrian stands to look at an electronic board showing the stock market indices of various countries outside a brokerage in Tokyo. Image Source: Reuters
Written By: Reuters
RELATED NEWS

Asian shares were trying to string together a fourth session of gains on Tuesday as optimism about global growth looked set to outlast an almost certain hike in U.S. borrowing costs this week.

The latest upbeat news came from China where banks doled out a surprisingly generous dose of credit in November, which could bode well for a pick up in retail sales and industrial output due later in the week.

MSCI`s broadest index of Asia-Pacific shares outside Japan <.MIAPJ0000PUS> inched up 0.06 percent, having rallied for three days in a row.

Wall Street had been led higher by technology and energy stocks, with Apple Inc

There was no lasting market impact from an explosion in New York`s busy Port Authority commuter hub which New York Mayor Bill de Blasio described as an "attempted terrorist attack."Investors continued their policy vigil with the Federal Reserve set to end its two-day meeting on Wednesday, while the European Central Bank meets on Thursday.

JPMorgan Economist David Hensley suspects the Fed will revise up its growth forecast while trimming the outlook for the unemployment rate, potentially adding upside risk to the "dot plot" forecasts on interest rates.

"The dot plot previously called for three hikes in 2018; it is a close call whether this moves to four hikes," he warned, a shift that would likely boost the dollar but could bludgeon bonds.

"For its part, the European Central Bank (ECB)is likely to emphasize its low-for-long stance and continue to distance itself from the Fed," he added. "The staff is likely to revise up its 2018 growth forecast, while we think the core inflation forecast will reveal an even slower recovery than before." RATES NOT EVERYTHING

The divergence in Fed and ECB policy was supposed to be bullish for the dollar, given it had widened the premium offered by U.S. two-year yields =rr>

The last time the spread was that plump was in 1999.

Yet the euro is currently up 12 percent on the dollar this year, while the dollar is down 8 percent on a basket of currencies <.DXY> - which just goes to prove that interest rate differentials aren`t everything in forex.

Dealers at Citi noted interbank volumes in the forex market had been 35 percent below average overnight and another thin session was likely on Tuesday.

There was rather more action in bitcoin, which touched a record peak of $17,270 on the Bitstamp exchange =btsp>

Oil prices were firm on news of a temporary shutdown of a pipeline that carries the biggest volume of the five North Sea crude oil streams.