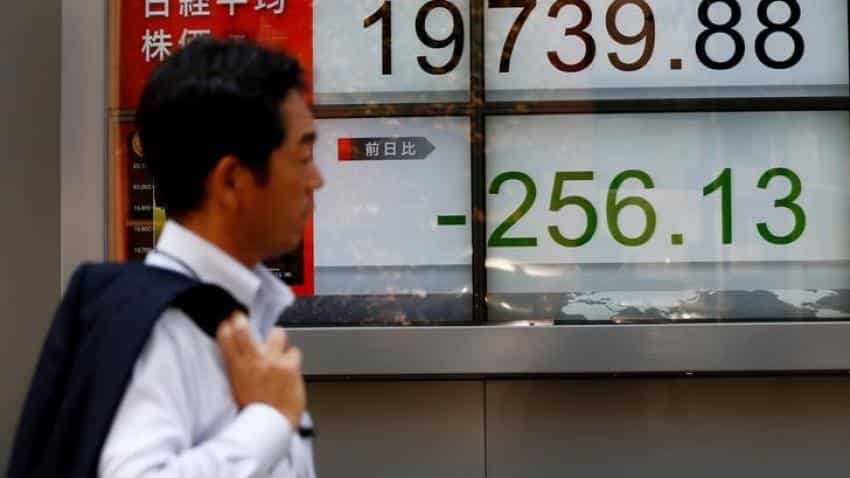 A man walks past an electronic board showing Japan's Nikkei average outside a brokerage at a business. Image Source: Reuters
RELATED NEWS

Asian stocks edged higher on Tuesday as investors took heart from further evidence of strength in the global economy, while the dollar hovered near a one-week high against its peers thanks to higher U.S. yields and a floundering euro.

Equity markets have enjoyed strong support this year thanks to rising corporate earnings on the back of an improving global economy.

That confidence was again on display overnight, with upbeat data in Germany helping the benchmark DAX <.GDAXI> brush off worries over the collapse of German coalition government talks.

Wall Street was led up by telecom and tech shares, with the Dow <.DJI> edging back towards record highs scaled two weeks ago. [.N]

In currencies, the dollar index against a basket of six major currencies stood near a one-week peak of 94.104 <.DXY> touched overnight.

The greenback was boosted by rising bond yields, with the two-year U.S. Treasury yield =rr>

The yield has risen as investors priced in more interest rate hikes by the Federal Reserve, while the Treasury is expected to increase debt issuance with a focus on short- and intermediate-dated maturities.

"The two-year yield appears to have risen too high now, as the Fed is only likely to hike rates twice at most next year considering current trends in U.S. wages and prices," said Makoto Noji, senior strategist at SMBC Nikko Securities.

The dollar was also boosted as the euro has been weakened by political risks arising from German Chancellor Angela Merkel`s failure to form a three-way coalition government, thrusting Europe`s biggest economy into a political crisis.

Merkel, whose conservatives were weakened after they won anelection in September with a reduced number of seats, said she would inform the German president that she could not form a coalition, after the pro-business Free Democrats withdrew from negotiations.

The Australian and New Zealand dollars were little changed at $0.7551 =d4>