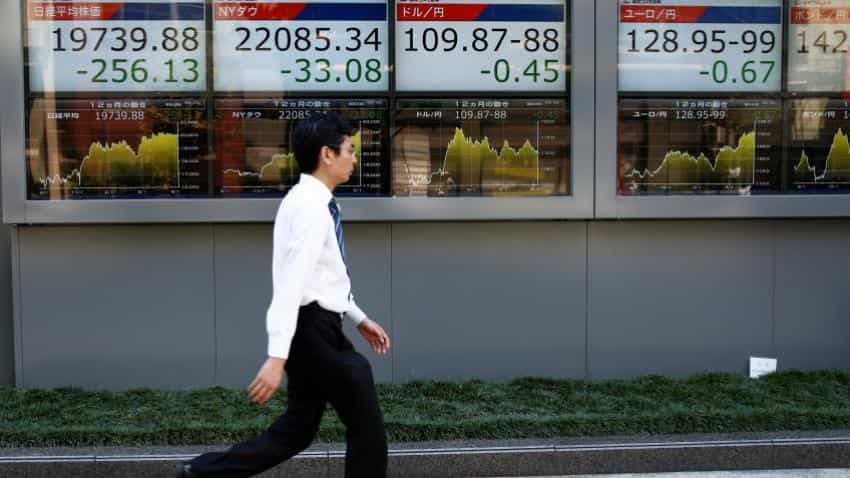 Asian stocks put in a subdued performance on Tuesday as Chinese economic data disappointed and investors pondered whether a marked flattening in the U.S. yield curve might be a harbinger of a future slowdown there.

China`s retail sales rose 10 percent on the year in October, while industrial output grew 6.2 percent. Both came in under market forecasts and briefly hit the Australian dollar, which is often used as a liquid proxy for China wagers.

The immediate damage was limited in stocks with the blue-chip CSI300 index off 0.4 percent and EMini futures for the S&P 500 down 0.1 percent.

Japan`s Nikkei managed to recoup 0.4 percent after four sessions of losses, but spreadbetters pointed to softer starts for the main European bourses.

Investors were waiting for any signs of compromise on U.S. tax policy after U.S. Senate Republicans on Thursday unveiled a plan that would cut corporate taxes a year later than a rival House of Representatives` bill.

Also on the menu are no fewer than 13 central bank speakers, including the heads of the U.S., European, British and Japanese central banks.

On Wall Street, a sharp drop in General Electric shares was offset by gains in high dividend-paying sectors including consumer staples and utilities.

General Electric slashed its dividend by 50 percent and cut its profit forecast while unveiling a plan that narrowed its focus on aviation, power and healthcare.

Currency markets were mostly quiet, with the dollar barely changed against a basket of counterparts at 94.488. The euro was up a slim 0.05 percent at $1.1671.

Sterling hovered at $1.3117, having fallen as far as $1.3063 on Monday amid concerns British Prime Minister Theresa May was losing her grip on power.

May`s blueprint for Britain`s departure from the EU faces a crucial test starting on Tuesday, when lawmakers try to win concessions on legislation to sever ties.

The dollar was steady at 113.67 yen after bouncing from 113.25 support overnight.EYING THE YIELD CURVE

A rise in U.S. bond yields has generally made it more attractive to buy dollars with money borrowed in low-rate currencies like the yen and Swiss franc.

Figures out on Monday from the Commodity Futures Trading Commission showed the speculative net short position in the Japanese yen had blown out to the largest since January 2014 and in the Swiss franc to the biggest since December 2016.

Yields on Treasury two-year notes hit a fresh nine-year high on Monday, shrinking the spread to 10-year debt to near its smallest since 2007.

The trend in part reflects market wagers the U.S. Federal Reserve`s plans to raise rates in December and two or three times next year will prove all too successful in restraining inflation by ultimately slowing the economy.

Tom Porcelli, chief U.S. economist at RBC Capital Markets, noted that a glance at history suggested a flatter, and particularly an inverted, yield curve was "compelling as an early warning sign" of recession.

"So even if we take the inverted curve as gospel, it suggests the expansion still has multiple years in it," said Porcelli.