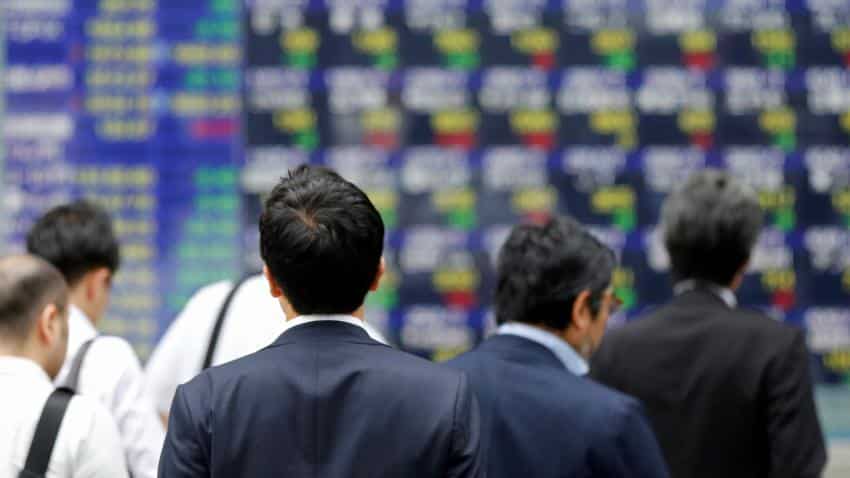 People walk past an electronic stock quotation board outside a brokerage in Tokyo. Image Source: Reuters
RELATED NEWS

Asia stocks hovered near a decade high on Thursday following another record breaking day on Wall Street, while the New Zealand dollar rallied as hawkish-sounding statements by the country`s central bank boosted the recently battered currency.

MSCI`s broadest index of Asia-Pacific shares outside Japan <.MIAPJ0000PUS> was up a fraction and in close reach of a 10-year high set the previous day.

Wall Street rose overnight thanks to a rally by videogame makers, with all three major indexes closing at record highs. [.N]

"It is a case of equity markets in emerging economies, already firm on internal demand and growth, being lifted by gains in those of developed economies," said Kota Hirayama, senior economist at SMBC Nikko Securities in Tokyo.

"Each country obviously has its own particular factors affecting local markets, but U.S. equities continue to drive overall risk sentiment."

The kiwi flew after the Reserve Bank of New Zealand (RBNZ) said early on Thursday that added fiscal stimulus and a lower local dollar would lead to faster inflation and likely an earlier rise in interest rate.

The New Zealand dollar had sunk to a five-month low of $0.6818 in late October as a change in government unsettled investors.

The dollar index against a basket of six major currencies was steady at 94.899 <.DXY>.

Government data showing a rise in domestic crude production had weighed on oil overnight but rising tensions in the Middle East limited the losses. [O/R]

U.S. crude rose slightly to $57.92 on Wednesday as tension flared between Saudi Arabia and Iran, while the Saudi crown prince tightened his grip on power.

The precious metal had risen to a three-week high of $1,287.13 an ounce the previous day as a potential delay in the U.S. tax reform plan was seen moderating the Federal Reserve`s interest rate hikes next year and support non-yielding gold. [GOL/]