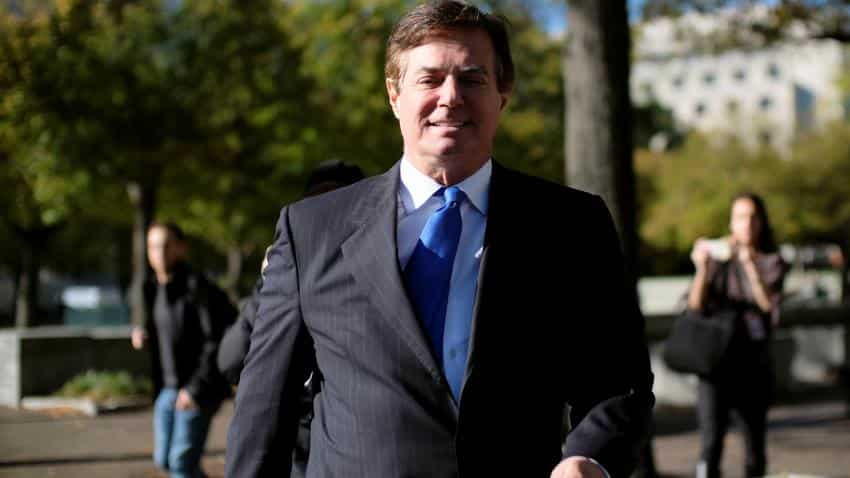 Manafort leaves U.S. Federal Court after being arraigned on twelve federal charges in the investigation into alleged Russian meddling, in Washington. Photo: Reuters

Beijing`s war on winter air pollution is forcing many northern steel mills, smelters and factories to curtail production, adding to uncertainty amid early signs of a slowdown in the world`s second-largest economy.

MSCI`s broadest index of Asia-Pacific shares outside Japan was up 0.2 %.

Wall Street pulled back from record-high territory on Monday, weighed down by a drop in drugmaker Merck and a report that U.S. lawmakers are discussing a gradual phase-in corporate tax cuts rather than reducing it all at once.

"The report of the gradual corporate tax cut option came when equities were strung high, so it served as a catalyst for markets to adjust," said Masahiro Ichikawa, senior strategist at Sumitomo Mitsui Asset Management in Tokyo.

"Expectations were for the corporate tax to be cut in one go. But even if the cut is implemented gradually, it still is a reduction and that won`t be bad news in the long term."

Manafort and another aide, Rick Gates, were charged with money laundering on Monday by Federal investigators.

"It`s weighing on dollar/yen a little bit. I think there`s a little bit of uncertainty," said Stephen Innes, head of trading in Asia-Pacific for Oanda in Singapore, adding the yen drew some support as risk sentiment was looking a bit wobbly.

The U.S. currency was also pressured as Treasury yields slipped on reports that President Trump is likely to appoint Federal Reserve Governor Jerome Powell, who is viewed as more dovish than other contenders, as the next head of the Federal Reserve.

The 30-year Treasury bond yield fell to its lowest in a week after Bloomberg quoted Treasury Secretary Steven Mnuchin saying the government does not see a lot of demand for ultra-long bonds.

The dollar index against at basket of six major currencies steadied at 94.596 after slipping overnight from a three-month high of 95.150.

European markets got a lift on Monday after an opinion poll showing waning support for independence soothed investors` concerns over a Catalan secession from Spain.

Crude oil prices managed to hold just below their recent peaks after being boosted by expectations OPEC-led production cuts would be extended beyond March.