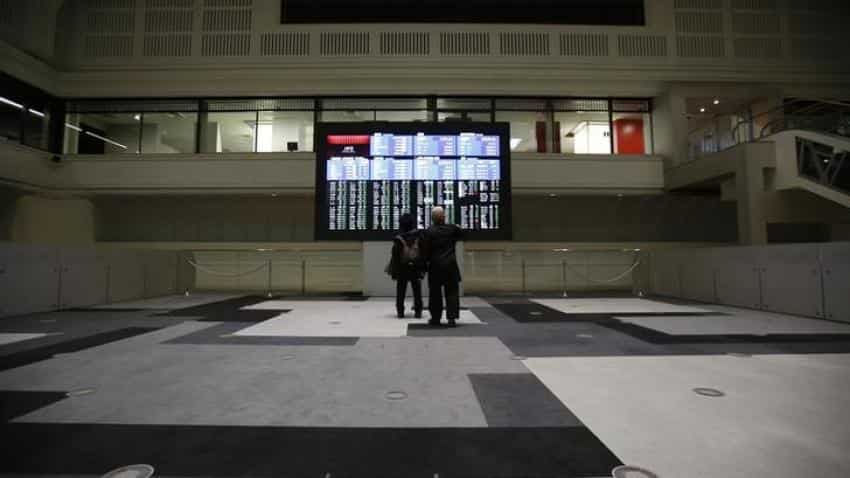 Visitors looks at an electronic board showing the Japan's Nikkei average at the Tokyo Stock Exchange in Tokyo. Image Source: Reuters
RELATED NEWS

Trump ramped up his tough rhetoric against North Korea as he kicked off a 12-day Asian trip on Sunday, saying the United States and its allies are prepared to defend freedom.

The U.S. president wants a united front with the leaders of Japan and South Korea before he visits Beijing to make the case to Chinese President Xi Jinping that more needs to be done to rein in Pyongyang. Trump also plans to meet Russian President Vladimir Putin during his trip.

While investors were on edge about the outcome of these high-stake meetings, sentiment has generally been buoyed by upbeat economic data in the United States.

"Global growth is a mature theme, and notably, we have seen real improvement in Europe, while in the U.S. the data is humming along nicely," said Chris Weston, senior market strategist at I.G. Markets.

"The wash-up after all the data flow was a further belief that the U.S. Federal Reserve can lift rates in December," said Weston.

MSCI`s broadest index of Asia-Pacific shares outside Japan was a touch softer at 556.39, but within striking distance of Friday`s top of 557.93 which was the highest since November 2007.

Australian shares traded around levels not seen since April 2015 at 5,956.90 points while Japan`s Nikkei advanced further to a 21-year peak.

Wall Street had a field day again on Friday, with the Dow Jones Industrial Average up 0.1 percent, the S&P 500 gaining 0.31 percent and the Nasdaq adding 0.74 percent.

Apple Inc gave the biggest boost to each of the three indexes after its stronger-than-expected results on Thursday.

Long queues formed outside the company`s stores in Asia and Europe on Friday as fans flocked to buy the new iPhone X, and the U.S. company moved closer to a $1 trillion market capitalisation.

U.S. tax reform is also going to be a focus with the House Ways and Means Committee allowing amendments to the bill from Monday, while the Senate is expected to release its own version of the bill on Wednesday.

The degree of differences between the two bills will set the tone in terms of tax reform expectations.

The dollar index, which measures the U.S. dollar against a basket of currencies, held near four-month highs, while the euro trod water to loiter around its lowest since July.

Oil rose to the highest in more than two years after U.S. rig data suggested drilling in the United States would throttle back.