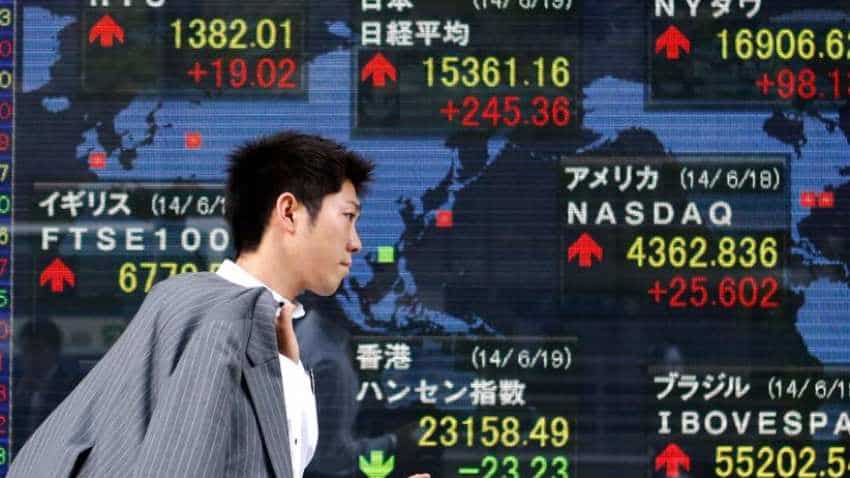 Asian shares wallowed near five-week lows on early Tuesday after U.S. President Donald Trump`s threat to raise tariffs re-ignited worries about U.S.-China trade tensions while Japan`s Nikkei opened down after a 10-day break. MSCI`s broadest index of Asia-Pacific shares outside Japan dropped as much as 0.2 percent to five-week low marked on Monday.

Japan`s Nikkei shed 1.1 percent to 22,006.58, taking a delayed hit after the country`s financial markets opened after a 10-day market break to mark the ascension of Japan`s new emperor to the throne. U.S. stock futures for the S&P 500 declined as much as 0.7 percent in Asia on Tuesday as top U.S. trade officials said China had backtracked on commitments in trade talks.

Their comments came after global financial markets had reeled on Monday after Trump had unexpectedly jacked up pressure on China to reach a trade deal in the midst of negotiations, saying he would hike U.S. tariffs on Chinese goods this week. But offering some solace to investors, U.S. Trade Representative Robert Lighthizer said he expected top Chinese negotiator Vice Premier Liu He would lead a delegation coming from Beijing for talks in Washington on Thursday and Friday.

Yasuo Sakuma, chief investment officer at Libra Investments in Tokyo said believed stocks have entered a new downtrend, as investors had growing doubts over whether the United States and China would cut a deal on trade any time soon. "Investors had been too complacent since the beginning of this year. Now it`s time for `sell in May,`" he said.

There was little movement in the currency market, with the euro trading flat at $1.1199, having held in a tight range for the past four sessions, while the dollar was steady at 111.75 yen. Traders were awaiting an interest rate decision from Australia`s central bank later in the day.

A slim majority of economists polled by Reuters expects the central bank to keep rates at a record low although calls for a rate cut have grown louder after disappointingly weak first-quarter inflation. In the commodity market, oil futures edged lower in volatile trade after a gain on Monday, as the cloud cast over the global economy by Trump`s tariff threat offset bullishness resulting from rising tensions between the United States and Iran.