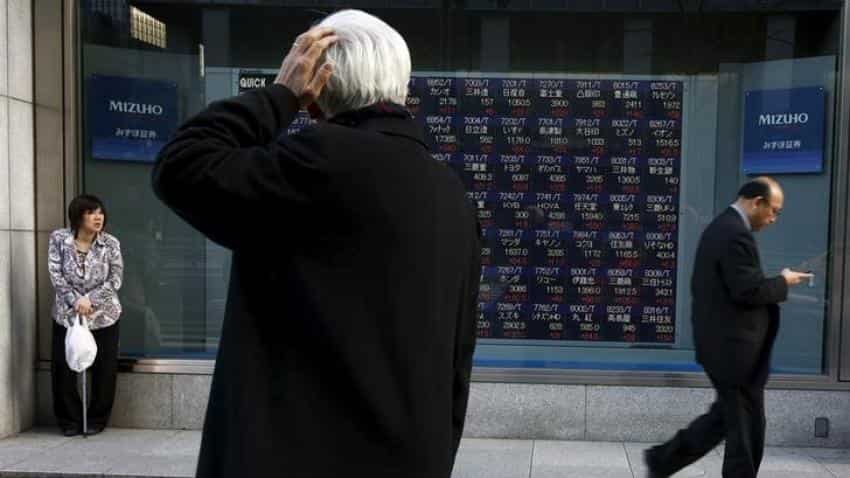 A man looks at an electronic board showing market indices outside a brokerage in Tokyo. Photo: Reuters

Asian shares hit a 10-year high on Wednesday on the back of solid economic growth globally, while oil prices extended a bull run on hopes that major oil producers will maintain their output cuts.

"Hopes of US tax cuts, a slight easing in US long-term bond yields since late last month and a rise in oil prices are all positive for Asian shares," said Yukino Yamada, senior strategist at Daiwa Securities.

"Last month, there were major inflows to high-tech shares in Korea and Taiwan. And GDP of these countries were also strong, showing the strength is spreading to the entire economy, not just within the high-tech sector," she added.

South Korea`s economic growth accelerated to its fastest growth in seven years last quarter while growth in Taiwan during the same period was the strongest in 2-1/2 years.

The advance reading of US GDP for July-Sept also showed healthy growth of 3.0%, well above the average of just above 2.0% since the financial crisis in 2008-09.

Wall Street`s three major indexes ticked up on Tuesday to end October with their biggest monthly gains since February.

Investors are focused on the progress of a U.S. tax-cut plan being developed by President Donald Trump and fellow Republicans and on Trump`s announcement of the next head of the Federal Reserve. The White House said he will reveal his Fed pick on Thursday.

Tax legislation had been expected on Wednesday, but sources said Republicans in the U.S. House of Representatives will delay the release for a day as lawmakers try to overcome differences involving the treatment of retirement savings accounts and state and local taxes.

"If the negotiation gets derailed, that would have a negative impact on markets so we need to be careful," said Masahiro Ichikawa, senior strategist at Sumitomo Mitsui Asset Management.

Trump's decision on the Fed chair is upstaging the start of its two-day policy meeting in Washington on Tuesday, although it is widely expected to leave interest rates unchanged in its statement on Wednesday.

Expectations that Powell will lead the Fed have helped to drive down US bond yields and the dollar this week.

The dollar's index against a basket of six major currencies stood at 94.66 from last week`s three-month peak of 95.15.

The euro was little moved at $1.1635, though it kept some distance from its three-month low of $1.1574 touched on Friday after the European Central Bank`s stance was perceived to be more dovish than expected.

The biggest mover in early Wednesday trade was the New Zealand dollar, which jumped 0.7 % to $0.6897 after the country`s jobless rate sank more than expected to a nine-year low of 4.6 %.

Bitcoin hit another record high on Tuesday after CME Group Inc, the world`s largest derivatives exchange operator, said on Tuesday it will launch a futures contract for bitcoin later this year, marking a major step in the digital currency`s path toward legitimacy.

Oil prices extended a rally which began in early October, largely driven by hopes that oil producing countries will agree to extend output cut at their meeting the end of this month.

The spread between the two contracts reached $6.99 on Tuesday, hitting the widest in more than two years, due to worries about supply disruption from Kurdistan.

"Oil prices may have risen a bit too much already on expectations of the production cut extension. I would say Brent is likely to ease below $60 early next year," said Tatsufumi Okoshi, senior commodity economist at Nomura Securities.

Asian shares edge up from near two-year lows as U.S. inflation data looms